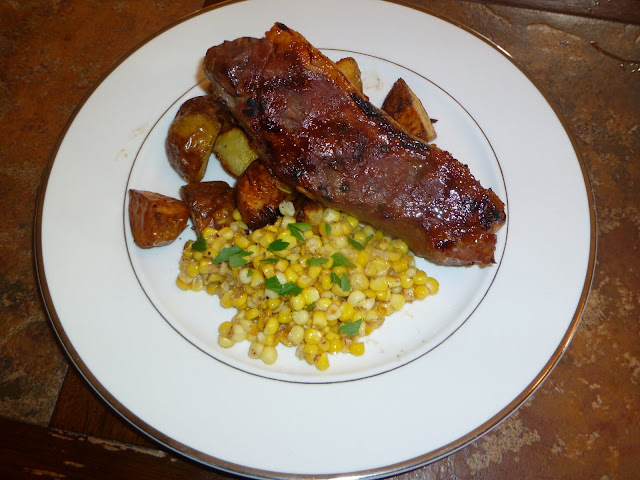 A few weeks ago, we went out to eat at a local restaurant. In the mood for red meat, I ordered the whisky marinated steak. It was amazing. Even though it came out a little more done than I had ordered, it was still tender and extermely juicy. It was so good that I wanted to try to recreate it. 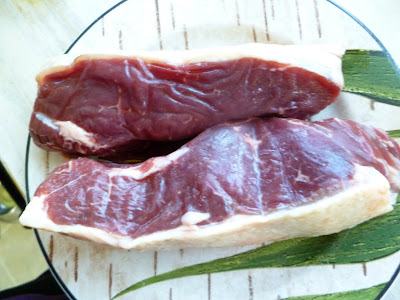 And what better effort could be spent on my newly-acquired, grass-fed strip steaks? 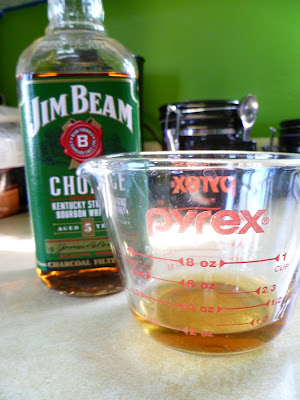 The recipe starts out with whiskey. So there's no way this steak is going to be bad. 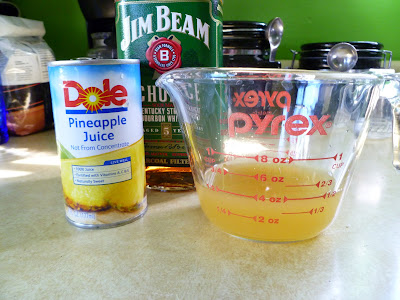 Chase...I mean, combine the whisky with some pineapple juice. 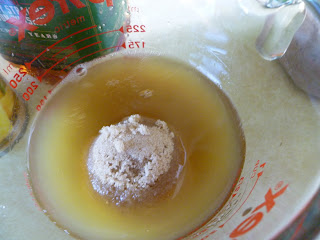 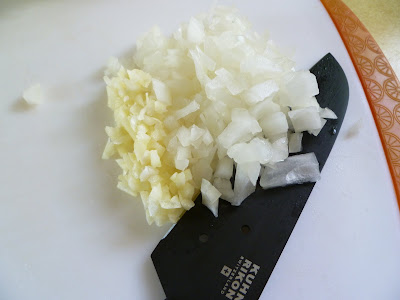 Mince some garlic and onion and toss that in, too. 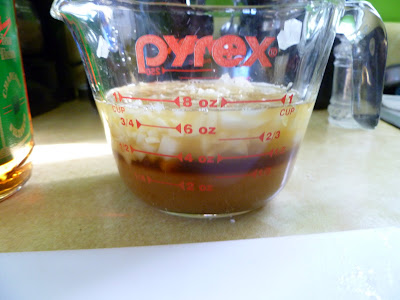 Here's what it looks like so far. The layers are kind of fun, don't you think? 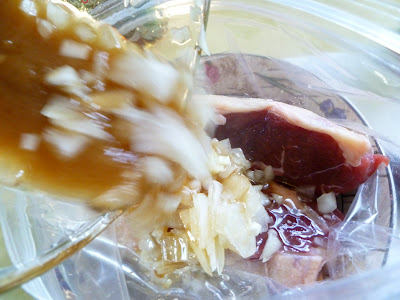 Pour what you've got so far into a plastic bag, along with your steaks. 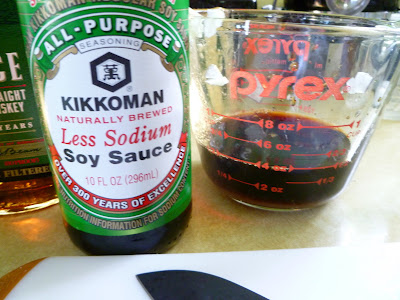 Now that your measuring cup is empty, pour in some soy. 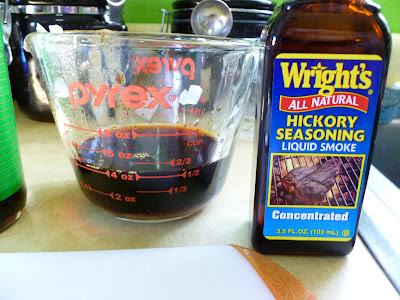 Add some liquid smoke. Try not to let it touch your hands...you'll be washing your hands for a while to get the smell off if it soaks in. It's strong stuff (I guess the word "concentrated" on the front would be a good clue on that, huh?) 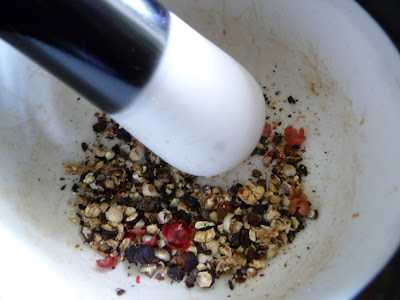 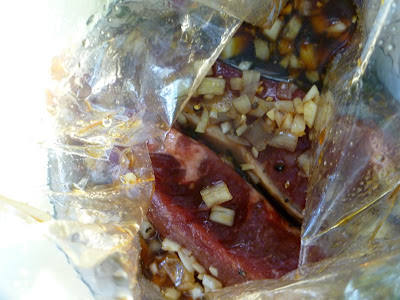 Let everything marinate overnight. The flavors should come together and lend some great flavor to the steaks. I can't wait! 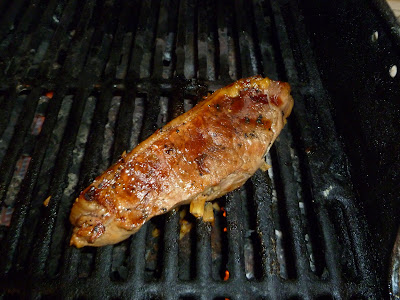 Bring your steaks to room temperature. While they're resting, it's a good time to work on any side dishes you may be having.
Toss your steaks on the grill. The traditional rule is 8-10 minutes per 1 inch of meat for a rare steak (so 4-5 minutes per side). You're supposed to subtract 30% of that cooking time when using grass-fed meat.

We actually tried grilling it (over medium heat) for 3 minutes--which turned out to be too short, and it went back on for the full cooking time. 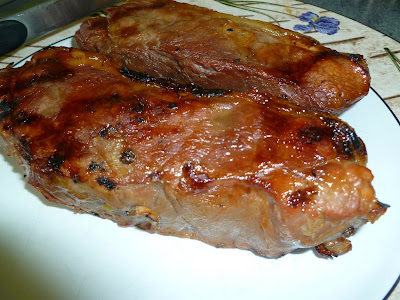 Here the steaks are, resting. Resting the meat after cooking allows the juices to redistribute in the meat, resulting in a more juicy piece of meat. 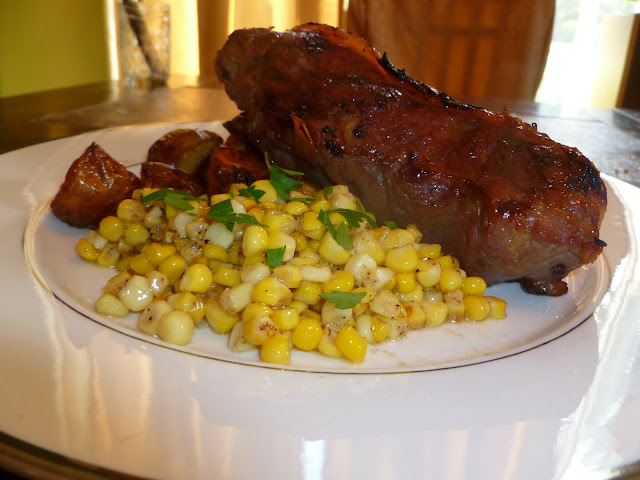 So, the verdict. I'm going to have to say that I prefer corn-fed beef. But that's probably because I've been spoiled with fatty, well-marbled beef for years. (The white fat you see marbled throughout steaks at the grocery store is saturated fat, created from a corn-heavy diet.) The difference was definitely interesting. When you grill a steak from the grocery store, most of the flavor comes from the fat, not the meat. On the flip side, grass-fed meat is quite lean, and the flavor comes from the meat.
These steaks definitely had a meatier flavor. It's hard to describe--grassy? Irony? It was definitely different than any meat I had had before. The grass-fed beef was chewier than I was used to also, and the first couple bites resulted in long periods of chewing because I cut the pieces too large.
The marinade helped the steaks stay moist, and they were delicous rare pieces of beef. I would love to experiment with this product more in the future!
Recipe: Whisky-Marinated Steak
2-4 New York strip steaks (marinade makes plenty for 4 steaks)
1/4 c. bourbon whisky
1/4 c. pineapple juice
1/2 c. brown sugar
1/2 c. chopped onion
2 garlic cloves, minced
1/2 c. soy sauce
2 tbsp. liquid smoke
1 tsp. roughly crushed peppercorns
Combine all ingredients. Marinate steaks 8 hours or overnight.
Grill over medium heat, 4-5 minutes a side.
Try this recipe today. Because there's nothing wrong with getting the booze out on Monday.
Posted by KimChee at 5:47 PM