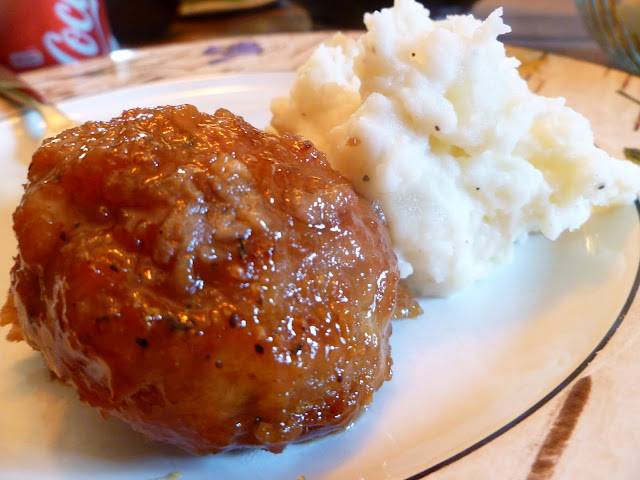 The first Christmas my husband (then boyfriend) were together, he was describing to me the food his family traditionally eats during the holidays. He kept going on and on about these ham balls. My (and probably your) first thought was, "They couldn't have thought of a more attractive name?" My second thought was, "I don't really like ham." But these meatballs made me change my feelings on ham (although I'm still scratching my head over the recipe name.)
I started making these for Christmas when we couldn't make it home. I've made them dinner size, as well as mini, as an appetizer. I've deviated from the original recipe a little and made them my own, but deep down they're still Grandma B's recipe. 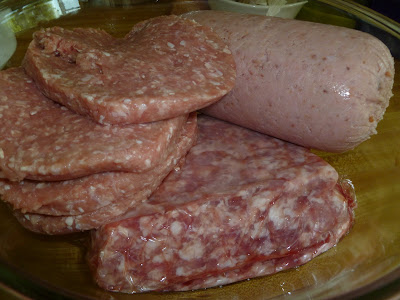 The recipe starts with, you guessed it, ham. I also use ground pork and turkey. The original recipe used beef, but I think the turkey makes them a little lighter and, surprisingly, moister. Beef can be a little grainy, and turkey is healthier to boot.

Sometimes I grind my own ham; a few whirls in my trusty food processor and it's good to go. But I was feeling lazy, so I cheated and bought one of these pre-ground logs o' ham. Seemed to work out just fine. 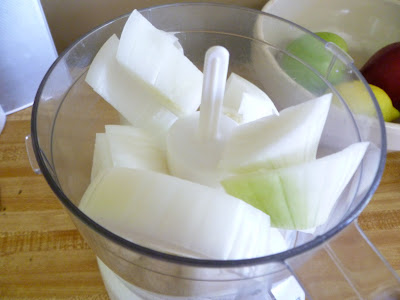 The next item also is another deviation from the original recipe--a medium onion and two garlic cloves. I send them around in the food processor to make sure they're a super-fine dice. This is another step that adds moisture, as well as flavor.
I know a whole onion seems like a lot, but there are 3 pounds of meat here. 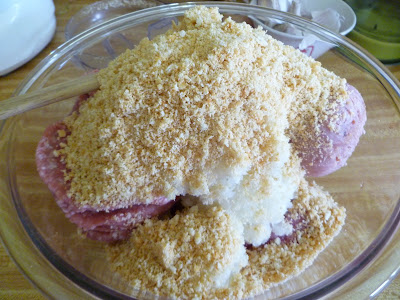 To the bowl o' meat-and-onion, add crushed Ritz crackers. I send those through the processor, too. 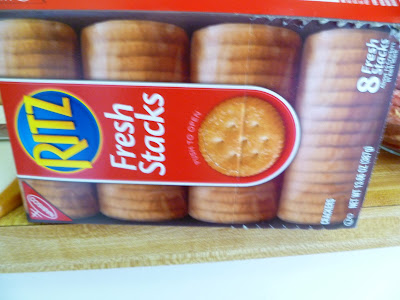 I hate buying whole packages of Ritz crackers. We don't eat many crackers and I don't like crackers in soup, so it's hard to use up a whole package before they go bad. And they're expensive!
So I was overjoyed when Ritz started making these. I can hang onto them for a while and there's no ending up with half a tube of stale crackers. And I got them on sale. Thank you, cracker gods! 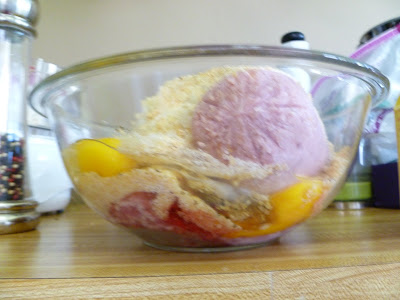 Throw in two eggs. They act as a binder to keep the meatballs together. Plus, that's just what you need with a bowl full of protein--more protein! 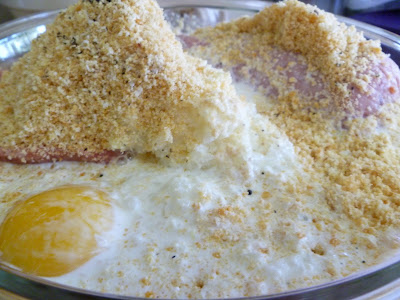 Then comes some half and half. The original recipe called for plain milk. Boring. Many of my other meatball recipes call for heavy cream. I decided to compromise. The half and half adds just enough richness. 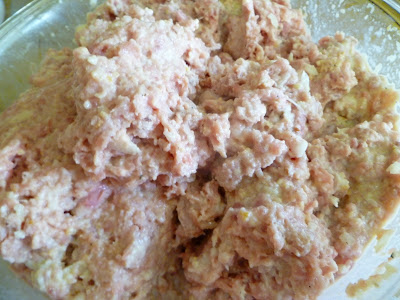 Salt and pepper everything (go easy on the salt, as ham is pretty salty) and dig in to combine. If you've got a kid who likes messy fingers, mixing this might be the job for them.

The meatballs might be a little moister than you're used to. Part of this is due to the half and half, and part of it is due to the ground turkey. They'd be a little firmer if we had used beef. But they've never been the round sort of meatballs. Don't let it worry you. 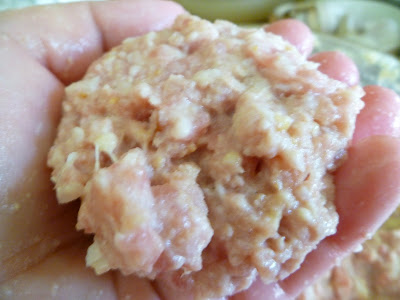 Start rolling out the meatballs. I like to make mine handful size, but whatever size you like will be fine. 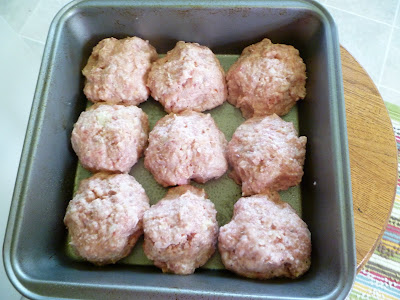 Did I mention that my husband used to have contests with his brother and cousin to see who could eat the most ham balls at Christmas? I consider myself lucky that I haven't had to make them over the holidays for the whole family. I'd be rolling meatballs all Christmas Eve. 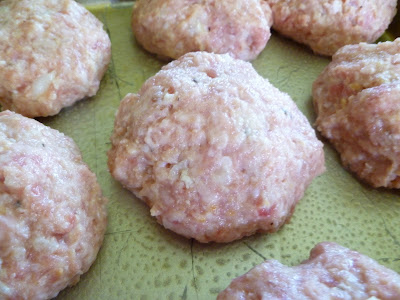 We had guests, so I cooked 18 and froze the rest. I just shape the meatballs, put them on a tray, and pop them in the freezer. Once they're frozen all the way, I take them off the tray and store them in a freezer bag. When you want to cook frozen ham balls, just place them right on the pan. There's no need to defrost.
Turn your oven to 350F, put the meatballs in, and start on the glaze. 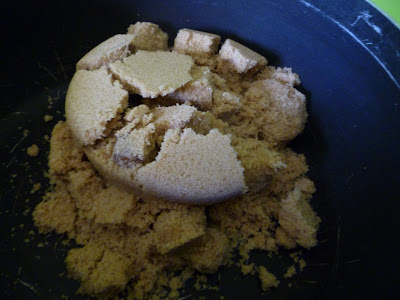 The glaze is simple. It starts with brown sugar and a pot. 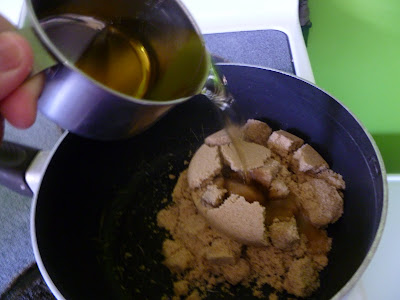 Pour a mixture of vinegar and water over the brown sugar. The original recipe called for all white vinegar, but I like the tang of cider, so I use half white and half cider. 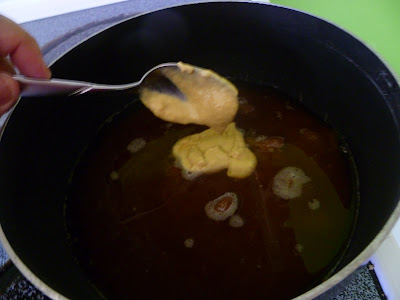 Then comes a dollop of mustard. I do believe the original recipe used yellow, but as I'm more likely to have dijon in my fridge, that's what I used. 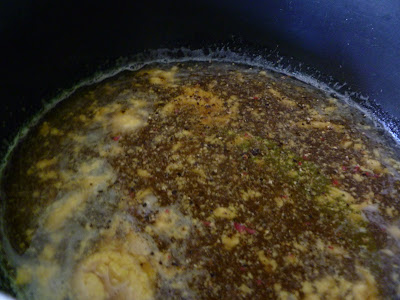 Doesn't look too appealing, does it? Don't worry, it'll turn out all right.  Turn the burner onto medium heat. 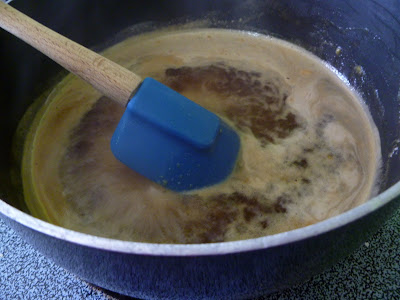 I like to let the glaze reduce for a little while. Not too much, but I do like to let it simmer by itself. 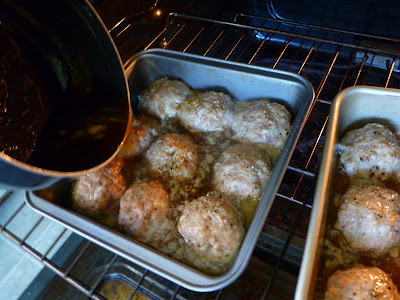 But I personally like my meat and sauce a little caramelized, so I let the meat cook by itself for a while to get a little color. Then halfway through the cooking process I pour the sauce over the ham balls.

The oven reduces the sauce down into a caramelly glaze. You get a little syrupy flavor along with the meaty texture of the meatballs. 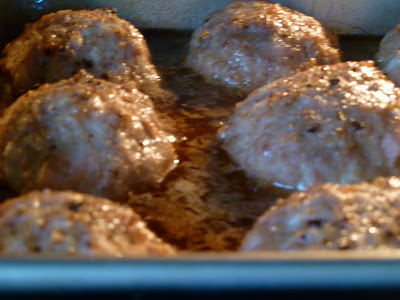 For the optimal glaze, make these on a cookie sheet with a deeper rim or in a cake or brownie pan spaced a couple inches apart.

I had to do mine in brownie pans. My cookie sheets were dirty and my big cake pans were being used for rolls. If you do them in cake or brownie pans and they're as crowded as these, broil them for the last few minutes to get more flavor and flip them over so both sides get colored. 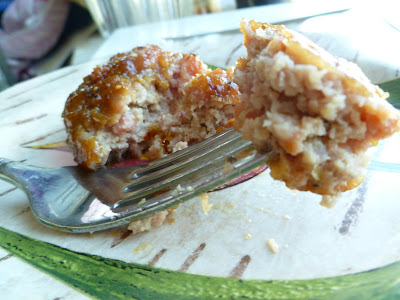 Mmm. I like to serve these with mashed potatoes, but they're really a meal in themselves. Try them today and see for yourself!