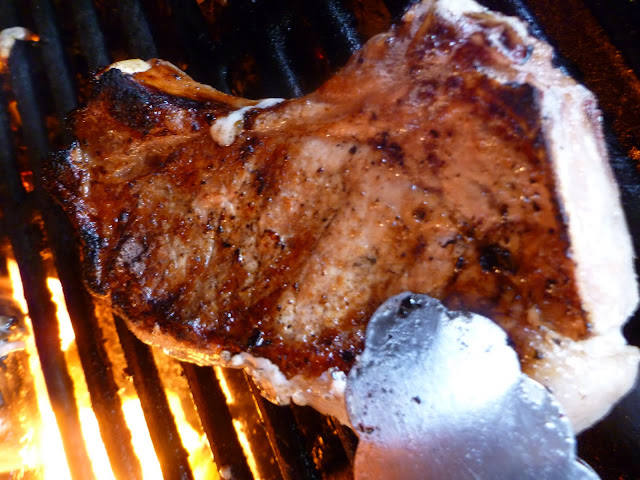 Pork chops are a great crowd-pleasing meal. I don't know anyone (apart from those who don't eat pork for religious reasons) who doesn't like a good pork chop.

There are millions of ways to prepare pork chops. They can be thin, little quarter-inch thick pieces of meat, great for stir-fries and pork sandwiches. They can be two-inch-thick monsters, perfect for stuffing or glazing with a sweet sauce. This month, I was given four thick, bone-in chops with our CSA package, and, on advice from the farm owners, decided to brine and grill my meat.

Brining is a great technique. It's an easy way to add both flavor and moisture into whatever meat you're preparing. I've never had brined meat that ended up dry and overcooked. And it's easy--I think a lot of people are hesitant to brine because they think it's complex. But nothing could be further from the truth! 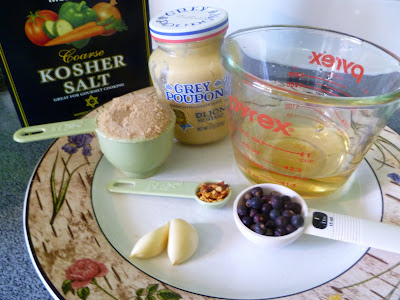 But really, you could just use water, salt, and a pinch of sugar if that was all you had. A simple brine recipe would call for 1 tablespoon of salt per 1 cup of water. 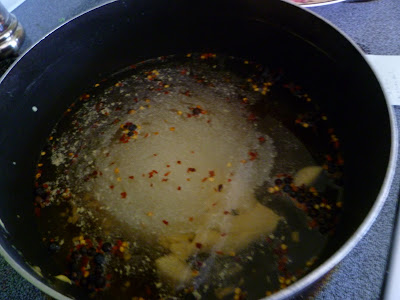 Dump everything into a pot and throw it on the stove. You'll want to heat the water to boiling. 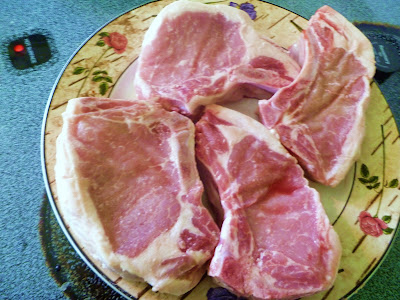 While you're waiting for your pot to boil, get friendly with your chops. Admire their smooth musculature. Take in their pinkish hue. Imagine what they'd look like after a hot, steaming herbal bath. 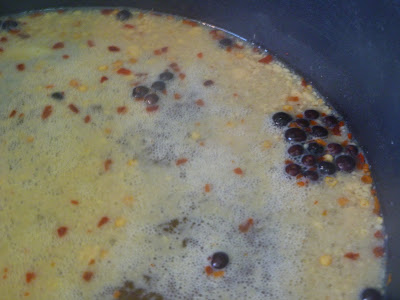 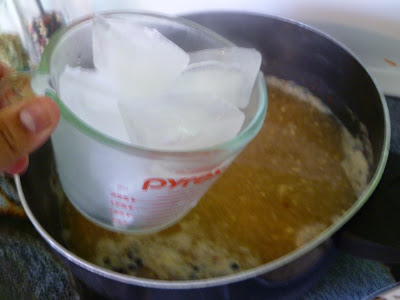 But you don't want to put your chops straight into the boiling water. I love pork chops but boiled is not my preparation of choice. So it's time to cool things down a little. I added an entire tray of ice cubes, as well as a cup of very, very cold water. 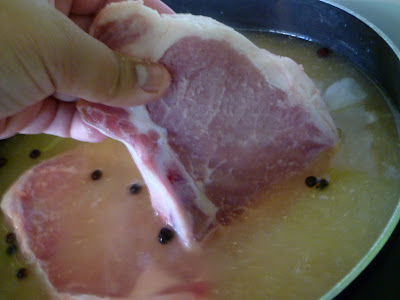 Once the marinade has cooled, you can let your chops go for a swim. You can let them soak for as short as an hour or as long as a day. I would have let mine brine overnight, but I didn't plan ahead so they only got an hour or two. They still ended up moist and delicious. I can only imagine if they'd had a few more hours of their salt soak.

The trick with brining is to soak your meat in a nonreactive pan. I used stainless steel, but if I had brined the chops overnight I probably would have used a glass bowl or a plastic Ziploc bag. Do not use aluminum or copper. Your brine (and meat) will end up with a metallic flavor. 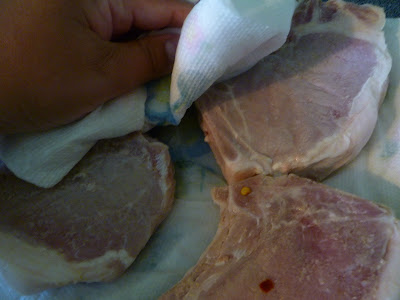 When you're ready to cook your meat, remove it from the brine and pat dry. You won't get that nice, charred crust from the grill with wet meat. Plus the towels soak up the excess brine and prevent the chops from being too salty. 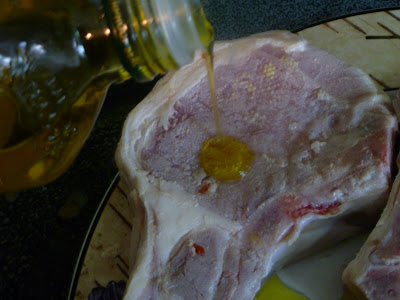 Show your meat some love by slathering it with oil.

I think it's kind of funny that the paper towels left a pattern behind on the meat. 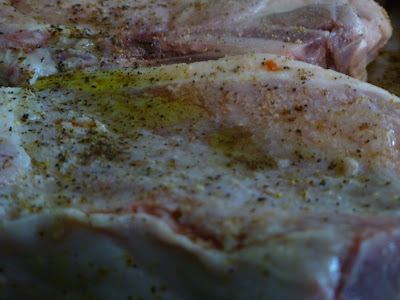 Give your meat a good grind of pepper (both sides, please!) There's no need for salt--there was plenty of that in the brine.

I also like to bring the meat to room temperature. This prevents the meat from shrinking when you cook it. 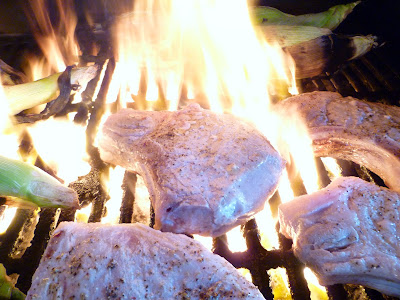 Grill the chops over medium heat for 5-6 minutes a side.

If your grill flares up, move the chops off the direct heat until the flames die down. Or just stand there and admire the light show. You can pretend later that you meant for the outsides to be black. 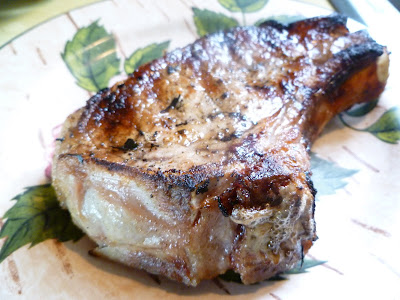 Let your meat rest for at least 5 minutes after taking it off the grill. Try not to grab it with your bare hands. Especially try not to growl at the other dinner guests when they try to grab a pork chop for themselves. Do not fight the dog over the bone after dinner. 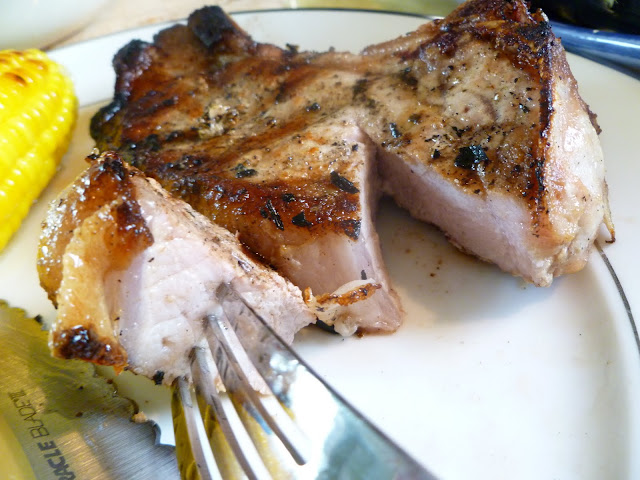 I was civilized tonight and used a knife and fork. ;)

Recipe: Brined and Grilled Pork Chops
4 1" thick pork chops (bone in, if you can find them!)

Take solution off of heat and add cold water and ice cubes. Don't skip this step--the liquid from the ice cubes and water is essential to get the right ratio of water to salt.n

When solution has cooled, add pork chops. Allow to marinate for at least one hour and ideally overnight.

When ready to cook chops, remove from brine and pat dry. Drizzle both sides with oil and season with pepper.

Grill over medium heat, 5-6 minutes a side. Allow to rest before serving.
Posted by KimChee at 2:53 PM