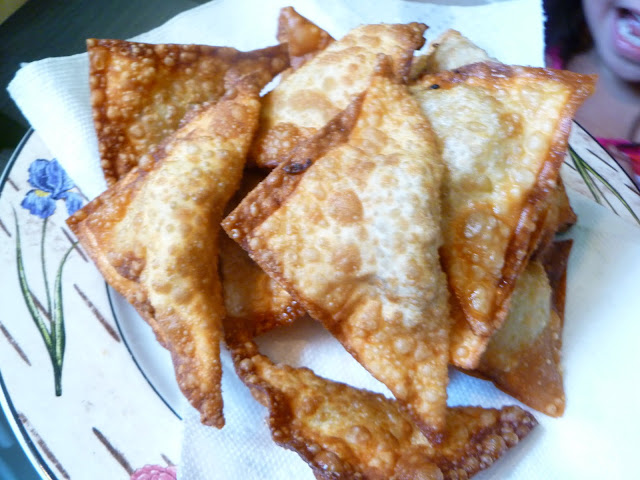 Well, since this is a blog by a Korean in the midwest, I suppose it's time for a Korean recipe! These dumpings are a great way to introduce the shy eater to Korean food. Who will have the will to argue? They're fried!

When I was a kid, every summer I attended a Korean day camp that focused on Korean adoptees and their families. It was a chance for adopted kids to meet other adopted kids. We made simple Korean crafts, sang songs, tried to learn hangul, the Korean written language, learned traditional dances (if you were a girl) or tae kwon do (if you were a boy), and, the most important part, ate Korean food. These man du were the most popular dish. 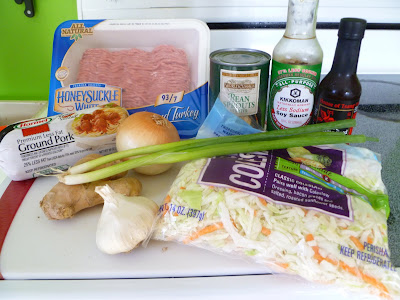 Here's what you'll need. See, not too many ingredients.
The recipe does involve a lot of choppoing though. Just a warning ;) 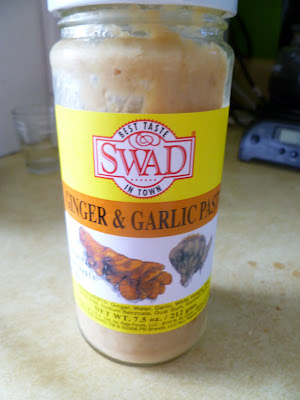 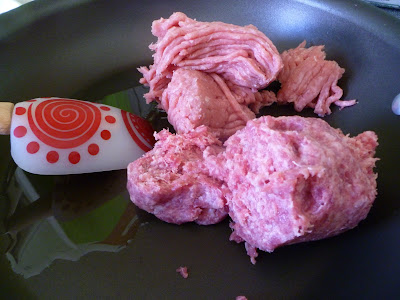 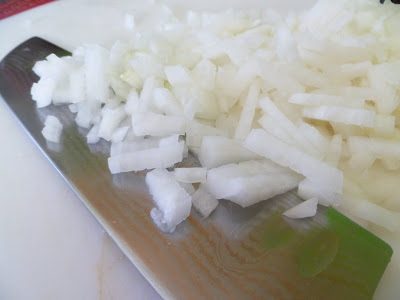 While the meat is browning, mince your onion into tiny pieces. 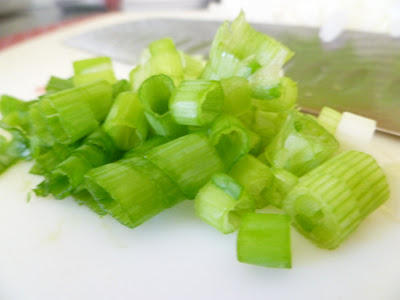 Do the same to a couple green onions. 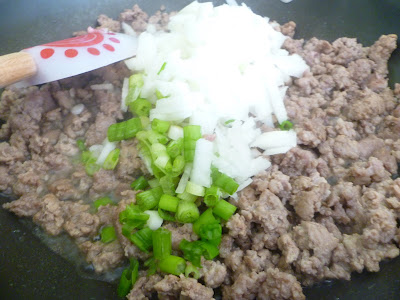 Throw them into the pan with the meat.
Be sure to break up the meat into small pieces as it cooks.

Now would be a good time to add your garlic and ginger too. 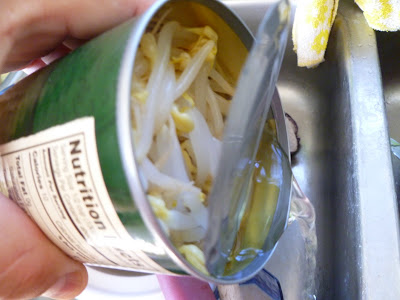 While the onions are cooking along with the meat, work on chopping the next ingredient--the bean sprouts.
Some of you may be thinking, "Bean sprouts? Gross!" But really, they're an essential ingredient. They add a crunchy texture that you can't get from anything else. It's sort of the same vegetable-y crunch you get from cabbage, but...different. And they don't taste "beany" at all, I promise!

I drain all the liquid and then rinse them. Then they get a violent chop. 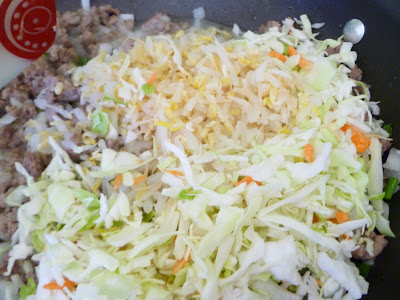 After you've chopped up your bean sprouts, they get thrown in with the meat. Pair them up with some thinly sliced cabbagee (I'm just using some cole slaw mix from the store.) Let everything cook together. The cabbage will wilt down quite a bit. 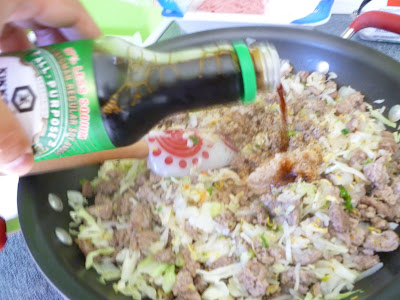 Splash in some soy. 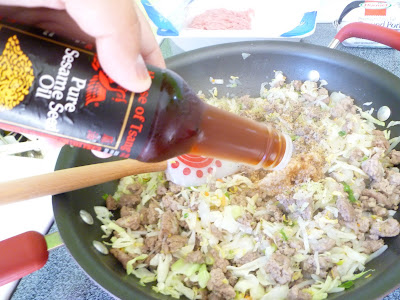 Also shake in some sesame oil. I love seame oil. It makes me hungry just thinking about it.
Many recipes say to go light with the sesame oil, because it has a strong flavor. And that's true. But I always add extra sesame oil--I've personally never had a dish where I thought, "Eeew, way too much sesame oil." If you've never enjoyed the smell of sesame oil, I highly recommend it. Nothing smells so good. 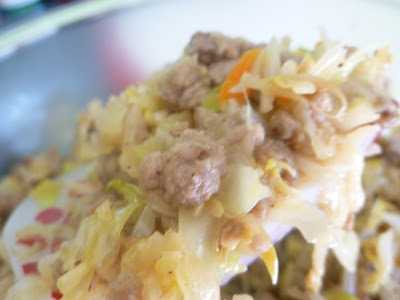 Once your meat and onions have cooked, the cabbage is wilted, and the filling is seasoned, it's time to pull it off the stove. It needs to cool for a while. If you put hot filling into the wonton skins, it will stretch the skins and cause them to break while being fried. 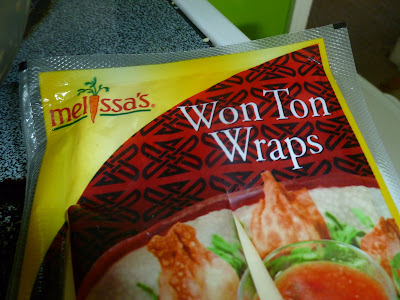 Here are the wonton skins I used. They should be easy to find at any grocery store. You might have to do some poking around--the store I bought these at had them next to the salads and lettuce. Other times, they're in the vegetable aisle, near the herbs and tofu. Just keep looking and you should be able to track some down.
With wonton skins, it's important to keep them moist. If they dry out they'll be hard to work with. 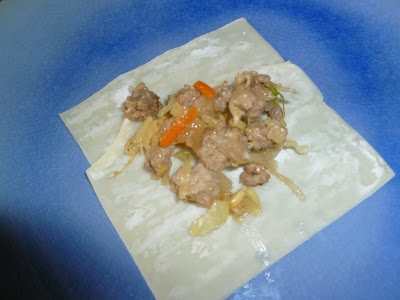 Lay the wonton skin flat and spoon some of the filling into the center. You don't want to add too much--if you do, the wonton skin will pop and you'll have to double up on the wrappers. 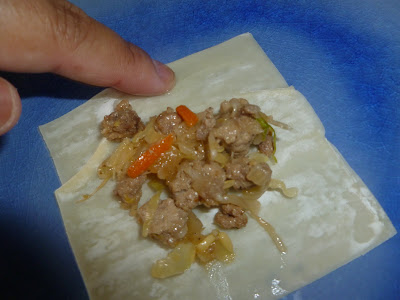 Moisten the edges of the wrapper with egg. Try not to be too messy; if your work surface gets too wet then your skins will stick to it and could rip. 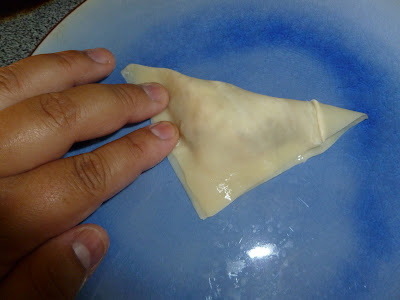 Fold the unmoistened corners over and gently pinch the edges together. It's also important to try to remove as much air from the filling pocket as possible. If there's too much air, the centers puff up and make it difficult to flip the man du. 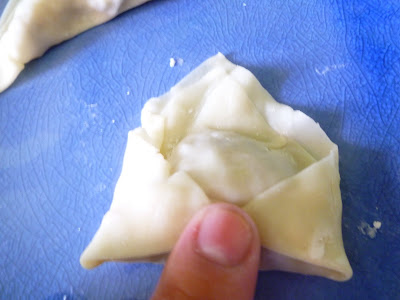 At this point, you could fold the corners over to make fun shapes or decorations with your wonton. I like the simple triangle because it's fast and easy, and it yields the most surface area of fried goodness. But the options always out there. 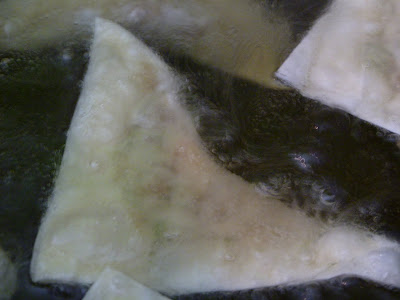 Once you have a small arsenal of man du made, you can start frying them in batches. 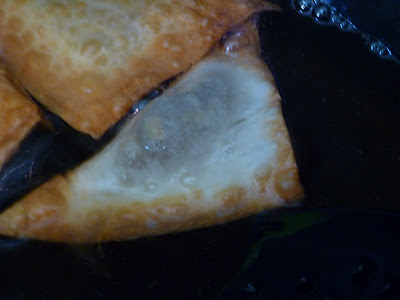 When one side is golden brown, flip the man du over. 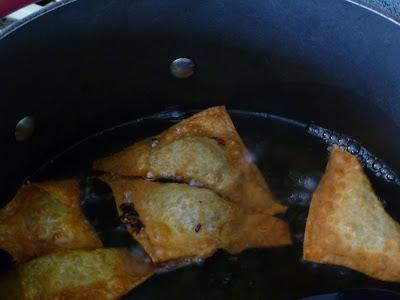 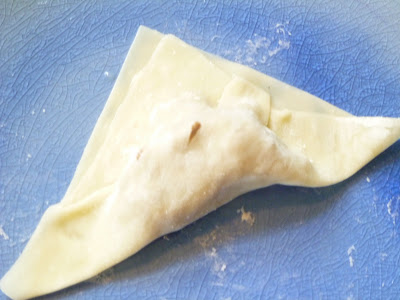 Now here's what I was talking about before, in regards to adding too much filling and the wonton skin ripping. That dark spot is where the filling ripped the skin. If I were to put that in the hot oil, the filling would spill out the hole, not only depriving me of the meaty interior but also adding debris to my frying oil. 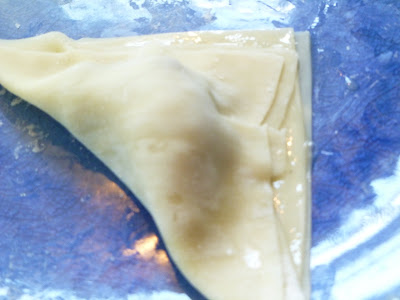 So I lightly brushed some egg over a new skin and covered the defective wonton. Good as new! It's like a giant Band-Aid! 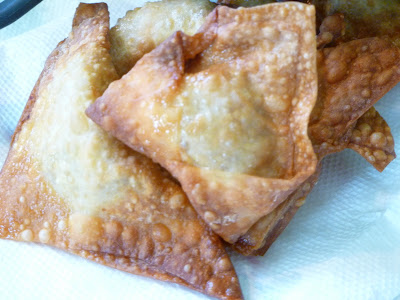 Nothing's great like a big old pile of man du. There's that wonton that got the extra folds. He looks pretty happy to be there, I think.
Korean Man Du. Try some tonight, and add a touch of Asia to your kitchen! 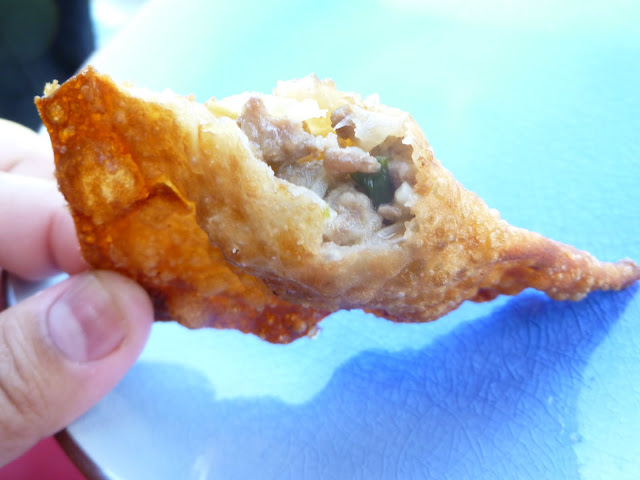 Recipe: Man Du (Fried Korean Dumplings)
1/2 lb. ground pork
1/2 lb. ground turkey
1 medium onion, minced
2 green onions, white and light green parts, sliced
2 garlic cloves, minced
1 finger length knob of ginger, minced or grated
1 can bean sprouts, drained and chopped
1 c. shredded lettuce or cole slaw
1 tbsp. soy sauce
1 tbsp. sesame oil
salt and pepper, to taste
1 package small wonton skins
1 egg, beaten
oil, for frying
Cook pork and turkey with a little oil in a saute pan over medium heat. Break up large chunks.
Add onion, green onion, ginger, and garlic; stir to combine.
Add bean sprouts, and cabbage. When cabbage is wilted and onions are cooked through, remove from heat.
Add soy and sesame oil, and allow filling to cool thoroughly before constructing your man du.
Lay a wonton wrapper flat on a clean surface. Place a teaspoon's worth of filling in the center of the wrapper. Lightly brush two edges of the wonton with egg, and then fold wonton over to form a triangle. Press gently to remove any air from the center.
Fry wontons in batches in vegetable oil over medium heat. Flip over when first side is golden brown. When the whole man du is golden, remove and drain on a plate lined with newspaper or paper towels. Enjoy while hot!
PS this makes a LOT of man du. The filling freezes really, really well; I usually just put any leftover filling in a plastic container and pop it in the freezer.
I would not recommend freezing the wonton skins or making the man du ahead of time and freezing. I've had nothing but bad luck. You could try partially frying them and taking them out once the wonton is fried up enough to be firm, but I haven't tried it so can't vouch for its success. Just an FYI.
Posted by KimChee at 5:21 PM