It's cold and rainy here this week, so I thought it would be a good time to focus on comfort foods. So stay tuned this week for warm, filling, stick-to-yer-bones recipes to keep you going on these blustery, frigid days.

First in our line of comfort foods this week is stuffed pork chops. Who says stuffing is just for Thanksgiving? Ditch the chicken and give the other white meat some love.

There are mixed opinions when it comes to stuffing meat (especially poultry), but whichever way you look at it, stuffing keeps the meat moist and also is an ingenious way to add flavor.

You'll learn several useful techniques through this recipe--namely, how to cut a pocket into a pork chop and how to make homemade gravy. Both invaluable skills! 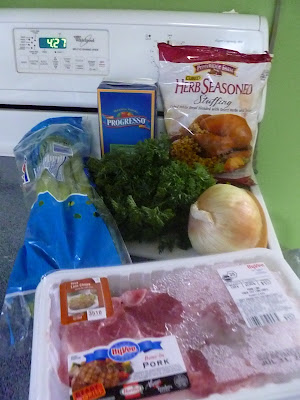 Let's start with the ingredients. Nothing strange here! 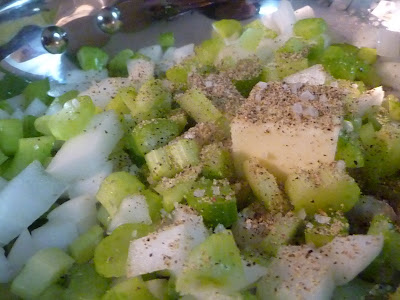 The first thing you'll want to do is start your stuffing (do you call it dressing? I know that it's sort of a regional thing. But in this case, I think it's technically stuffing--since it's going inside the meat.)

Anyway, I start my stuffing or dressing or what have you with celery, onions, butter, and salt and pepper. These can start softening up while you work on your pork.

Even if you don't think you like celery, I think it's an essential flavor and texture element to stuffing. Don't believe me? Fine, then, leave it out. Don't say I didn't warn you. 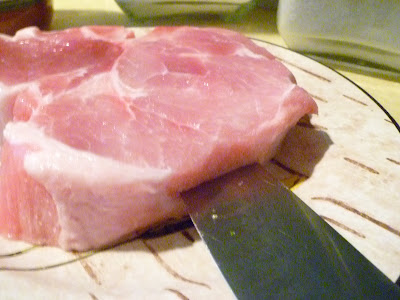 To cut a pocket into a pork chop, you'll want a sharp knife with a point.

Find the side of the chop away from the bone--the part with the fat on the side. Keep it flat on your work surface--don't want to miss and cut yourself!--and decide where you want the pocket.

Lightly score the side of the chop to make an incision through the layer of fat. Once you're into the softer, pink part of the meat, waggle your knife around gently. Cut as close to the sides of the pork chop as you can, without cutting through. And don't make the opening of your pocket too large. The larger you make it now, the more work you'll have to do closing that hole up later. 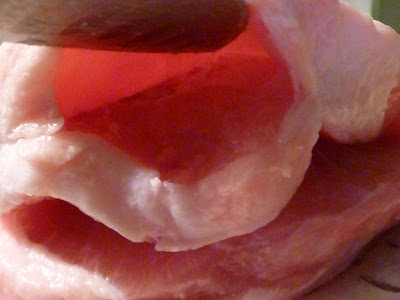 If you're careful, you can get a nice stuffable pocket. 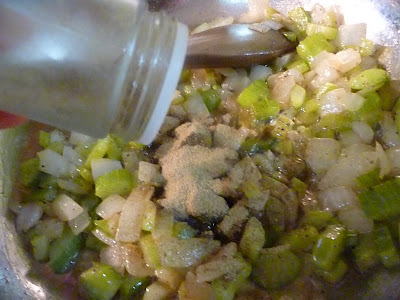 Now, back to your stuffing. By now, the onions and celery should be cooking down and nearly done. At this point, I like to add in a shakeshakeshake of poultry seasoning, just for more of that Thanksgiving flavor. Stir everything to make sure all the celery and onion bits are flavored, and take the pan off the heat. 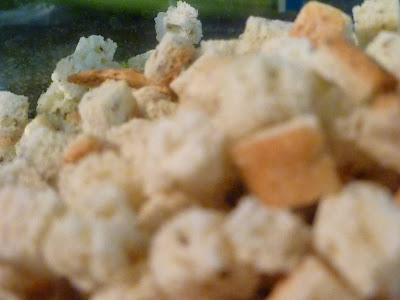 In a new bowl, measure out your bread cubes. I usually use stale bread for stuffing, but it's been so humid here that letting bread go stale is just not going to happen. And I'd just bought a fresh loaf of bread so wasn't feeling up to buying another loaf just for this. So I used these nifty cubes of stale bread from the store. They worked pretty well. I like my stuffing a little chunkier, with the bread in slightly larger pieces, but in a pinch these were perfect. 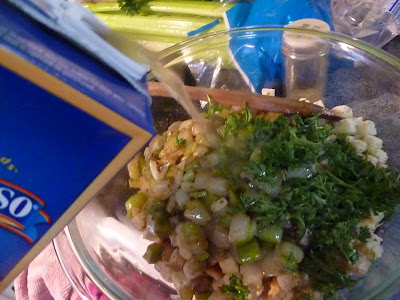 Combine the stale bread with your celery and onion mixture. I also like to add in a handful of fresh or dried parsley, for color. Pour enough chicken broth over the top to moisten everything, and toss it all together. 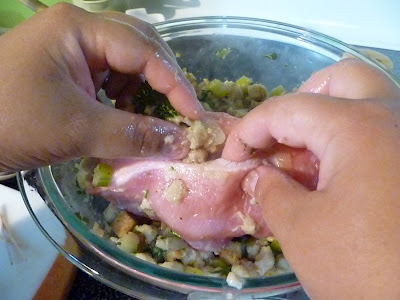 Once the bread has soaked up the broth, it's time to stuff your chops. Just grab a pork chop and start shoving the stuffing in.

Don't get excited and overstuff, though, or the excess will come right out and will make a minor mess.

I put the extra stuffing into a casserole dish and heat it in the oven (so I guess it would be dressing at this point?) It gets served on the side with dinner. 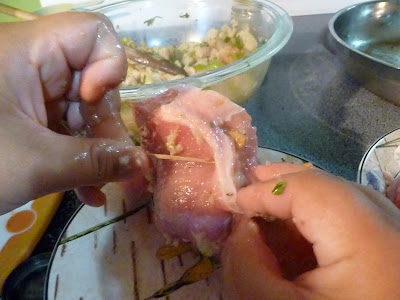 Seal the pocket shut with some toothpicks. Or, if you're more the technical type, I suppose you could whip out a needle and thread and suture it shut. 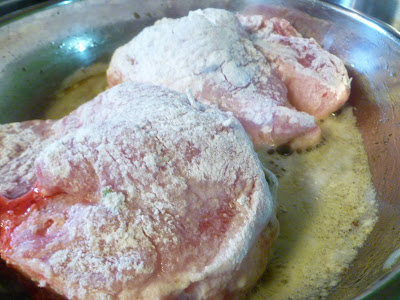 Lightly dust the stuffed chop in flour. Pour some olive oil and butter into the same pan you used on the celery and onions and sear the pork chops over medium-high heat. 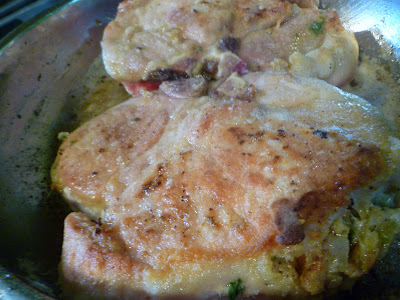 Make sure you get some nice color on both sides. 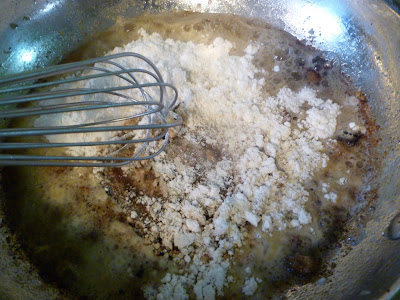 Once your chops have gotten some color, it's time to make the gravy. Take the chops out of the pan and keep them on standby.
If you remember my Chicken and Wild Rice Soup recipe, you'll remember how to make a roux. If not, this will be a nice lesson to learn.
Basically a roux is a thickening paste. It's made with an equal amount of flour and fat. And that's exactly what you'll want to do here.

If you mess up and add too much flour, be sure to add back in enough butter to make an equal paste. Otherwise you might end up with dumplings instead of gravy when you pour in your broth.
You'll also want to make sure your roux is cooked. An undercooked roux will still taste like flour, which isn't very tasty. But then, you won't want to cook it for too long, either, or you could cook out all the thickening power from the starch. A minute of cooking time is the right amount of time. 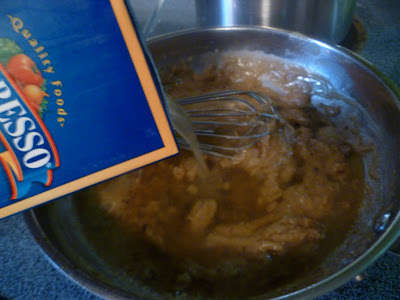 Once your flour and butter are cooked and pastelike, you can start adding in your liquid--in this case, the rest of the chicken broth you used with the stuffing.
It's important to add the broth slowly and to whisk--otherwise you could end up with lumps. And that would mean lots more whisking to get rid of the lumps. Lots and lots and lots of whisking. Or just lumpy gravy. 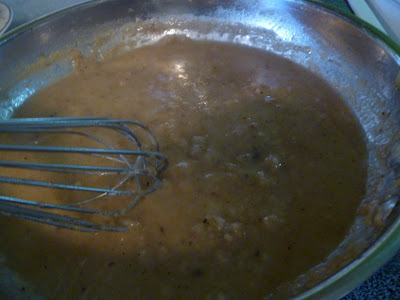 Just add a little at a time and don't forget to whisk. Eventually you'll have a thinnish-looking gravy. But that's okay, because once the liquid starts to boil, the gravy will thicken appropriately. The stuffing in the pork chops will help the gravy along, too. 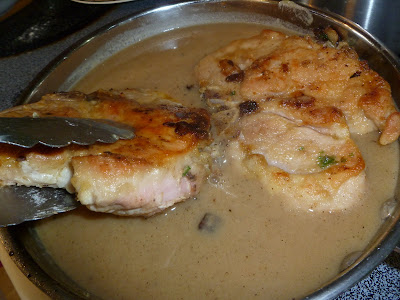 Once your gravy has come together, it's time to put the chops back in. Hopefully you picked a deep enough pan! I can't imagine overflowed gravy is fun to clean off the stove. 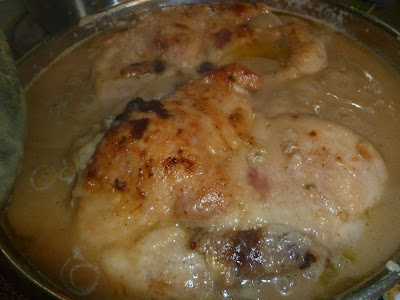 Cover the pan and let everything simmer for 15-20 minutes. When the pork chops are cooked through (or you can no longer resist the smell of pork chops and gravy!) your dinner is ready.

Look at that. A nice, thick, moist pork chop stuffed with savory dressing and covered in gravy. I like to serve mine with mashed potatoes and green beans. How you could not like that? 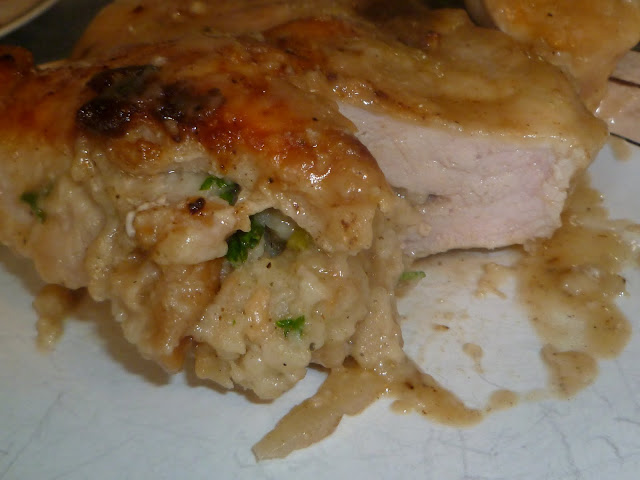 Recipe: Stuffed Pork Chops
This recipe is for 2 pork chops, but it can very easily be for 4, 6, 8, 10...however many pork chops you want. You could sear the pork chops on the stove and then put them in an oven-safe dish, then make the gravy, pour it over the pork, and cover and cook the chops in the oven.

2 thick cut pork chops (with or without a bone)

Saute celery and onions in the 2 tbsp. butter. Season with salt and pepper.

While celery and onions are cooking, carefully cut a pocket in each of the pork chops.

When celery and onions are softened, sprinkle with poultry seasoning. Combine with bread cubes and parsley. Add enough chicken broth and gently stir until everything is evenly moistened.

Season pork chops and then lightly dredge in flour.

In the same pan, melt butter and olive oil. Sear the pork chops until both sides are golden brown. Remove chops from pan.

Add remaining butter and flour. Also add the flour and whisk together. Stir the roux for a minute to cook out starch.

Slowly add remaining chicken stock until flour is completely incorporated. Add pork chops back to the pan, and cover.

Cook pork chops for 15-20 minutes, or until fully cooked through.

The remaining stuffing can be put into a greased casserole dish. Cover the top with tinfoil and heat in a 350F oven.
Posted by KimChee at 11:14 AM