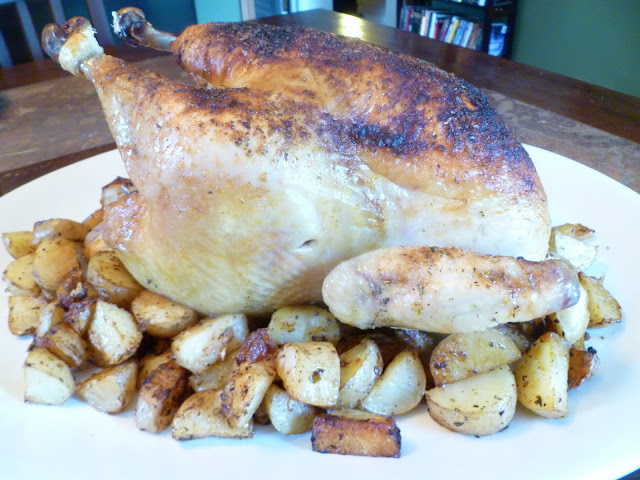 Roasting a chicken is one of those basic, comforting recipes that I think everyone should know how to make (along with meatloaf, pot roast, and homemade yeasty bread like dinner rolls.) Roast chicken is inexpensive, it's easy, and it's one of those dishes that looks like it took more effort than it did. Don't tell me you wouldn't feel special if you showed up at a friend's house for dinner and they served a whole roasted chicken. 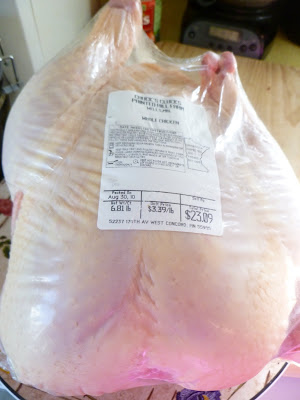 I had already planned on roasting a chicken this week and was so excited when I saw this bad boy in our CSA package. Is this fate, or what?

I have to say. This is an enormous chicken. It could be a mini turkey. It's huge!

Expect to see a few more chicken recipes in the near future.


The first thing to do is to rinse your chicken. I like to make sure it's extra clean after having been processed, especially whatever's in the cavity. Plus, usually the processors leave the extra parts inside--organs, neck, etc., and some of those wouldn't taste too good (or make your chicken taste too good) if you forget to remove them.

Once I forgot to check the neck cavity. The organs and the neck were in the neck hole, in a plastic bag. The chicken had been in the oven for quite a while when I remembered. Luckily the bag was still intact and not melted, but eek. Having to throw away a whole, almost-roasted chicken would have been a night ruiner. 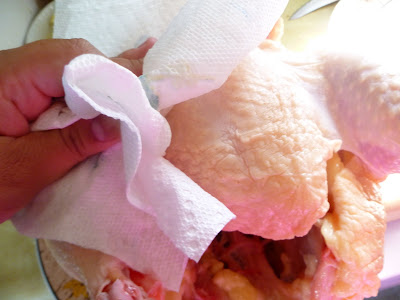 Once your chicken is rinsed, pat it dry, inside and out. A wet chicken won't make crispy, crispy skin. And that's the best part of the chicken!

That, and the chicken butt. Seriously. Cut that triangular nubbin off your chicken when it's done and pop it in your mouth. You'll be in chicken fat heaven.

Yes. I do have an obsession with poultry fat. What's it to ya? 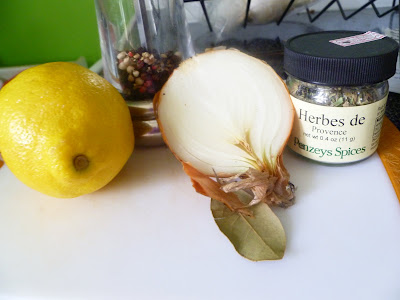 After you've salivated over chicken fat, the next thing to do is to decide what to stuff in the cavity to flavor said fat. I like to match what goes inside with what goes outside. Sometimes I'll stuff the chicken with ginger, garlic, and scallions, and season the skin with five-spice powder, sesame oil, and soy.

But my favorite ingredients are onion, garlic (not pictured), lemon, and a bay leaf or two. I also used some dried Herbes de Provence, which is simply a blend of dried herbs. I normally would have used thyme, but I was out of thyme.

Just realized that was a bad (and unintentional) pun. 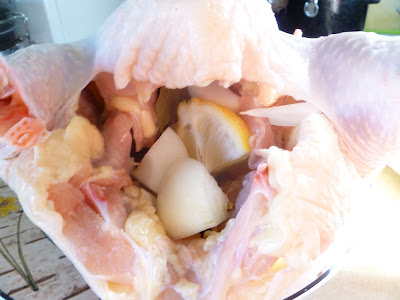 Cut the onions and lemon up so they'll fit and then stuff 'em in. Season the cavity well with salt, pepper, and your dried herbs.

I hope this isn't too humiliating for the chicken. I feel like a chicken gyno at work here. 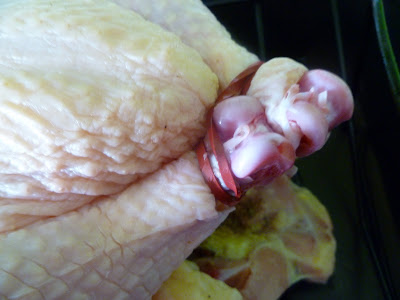 Now it's time to truss your chicken. I've got these silicone bands, but a simple wind of string or twine will do the same job. This will help your chicken brown more evenly and will give it that pretty, "full" look that magazine chickens have.

Don't pull them too tight, though, or the skin will rip as the chicken roasts. Just enough pressure to keep the ends together is fine.

Fold the wings underneath the body. Again, this will make it pretty as well as preventing the wing tips from burning. 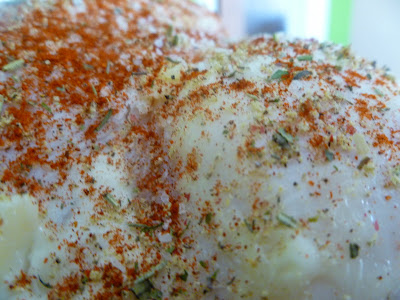 Now it's time to give your chicken a nice rubdown. I rub softened butter all over the outside, as well as under the skin. Then everything gets lots and lots of salt and pepper. I also seasoned it with some of the same Herbes de Provence I used for the inside, and also some paprika. The paprika will help brown the skin. 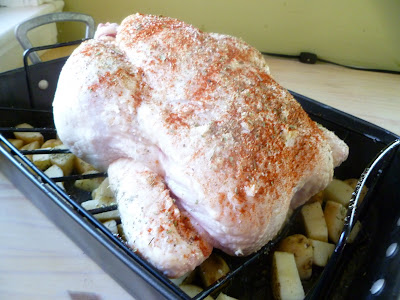 Here's Mr. (or Mrs.) Chicken, all ready to go into the oven.

I like to use a large roasting pan with a rack. The rack ensures the bottom of the chicken gets roasted too. It also leaves a nice space to add potatoes.

If you saw my recipe for Duck Fat Roasted Potatoes, this is essentially the same recipe. The only difference is that I'm using the fat from the chicken instead of rendered duck fat.

I spread some olive oil along the bottom of the pan to help the potatoes along until the chicken gives up some of its fat. I seasoned them with salt, pepper, and the same herbs I used on the chicken. I also put a pat of butter in with them, just to be extra naughty.

Chicken fat is good times. I like to save the excess and freeze it. It's nice to have on hand if you're making gravy but don't have enough drippings. I also like to throw in a chunk when I'm making soup, if I'm not using homemade chicken stock. It adds that richness that boxed broths just don't have.

You'll see the chicken fat from this recipe featured in my chicken noodle soup recipe, which will be making an appearance soon.

Oh, and while we're on the topic of freezing fat and stock, my chicken came with its neck. I also froze the neck. I'll use it the next time I make homemade stock--which I should be doing in the near future.

Now, the amount of time your chicken takes to roast will depend on the size. I usually do 3-4 lb. birds, which take around an hour. The chicken I got today was over 6 pounds so it will have to go longer. I checked it at an hour and 15, then an hour and a half. I was ready for it to go as long as an hour and 45. 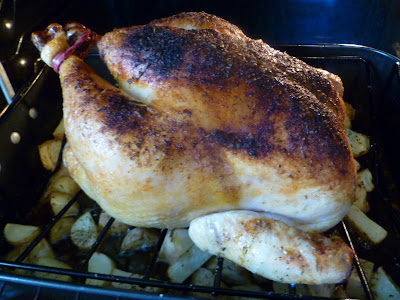 Here's what it looked like after about an hour. I wish you could smell what I smell. Oh my goodness.

You can see that it's getting a little dark already, even though it's got probably 30 minutes left. To keep it from burning, I tented the top with some tinfoil (shiny side out, please.)

Looks pretty dang good if I do say so myself. 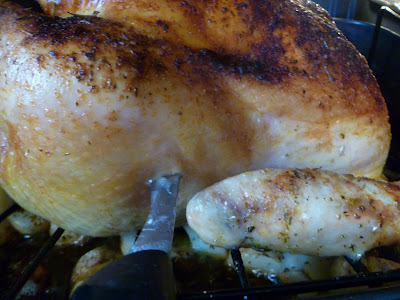 After a period of between an hour and an hour and 45 minutes (depending on the size of your chicken), you'll end up with a moist, delicious, flavorful chicken covered in crispy skin. To make sure it's done, get a sharp knife and poke your chicken where the leg and thigh meet. If the juices run clear, then your chicken is ready. If the juice is still pink, let the chicken cook a little longer.

Also, if you're roasting the potatoes with the chicken, you'll need to drain off the excess chicken fat. This is a necessary step--I got about a cup of extra fat from this chicken. Way too much for the amount of potatoes I was making.

I remove the chicken from the pan once it's done and allow it to rest. Once it's out of the pan, I carefully pour the chicken fat into a bowl or measuring cup, leaving just enough in the pan for the potatoes to roast in, and then turn on the broiler to get the potatoes a nice crust.

Don't be afraid of the chicken. Embrace it! 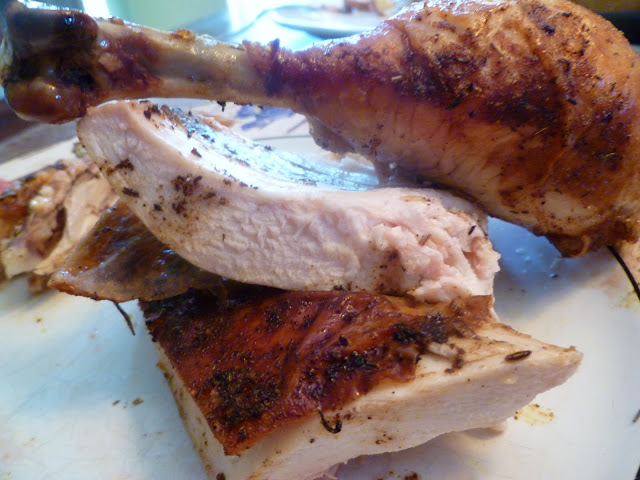 1 lemon, quartered
1/2 onion, quartered
1 bay leaf
2 garlic cloves
salt and pepper
dried herbs of your choice (any you like will do; use them throughout the recipe)

Wash chicken; set aside giblets and save them for another use. Dry chicken thoroughly inside and out.

Truss chicken legs together. Tuck wings underneath the chicken.

Put chicken breast side up in a roasting pan. Slather butter all over chicken, including underneath the skin. Season liberally with salt, pepper, herbs, and paprika.

Let rest and then carve. 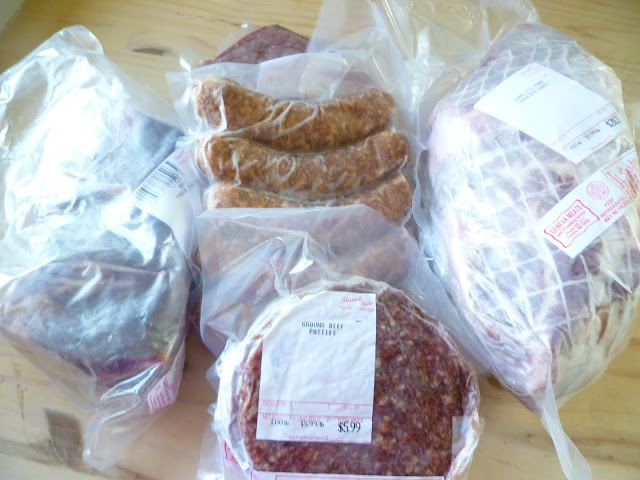