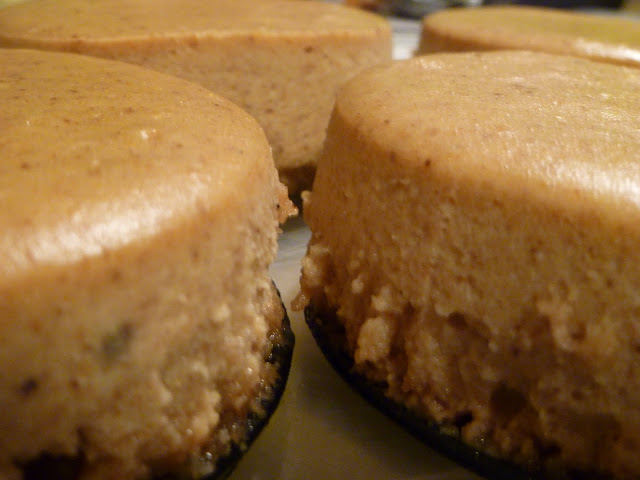 Can you tell I like the fall? Recipe after recipe featuring fall flavors and themes! Just wait until Christmas, I'm already planning on roasting a ham for ya'll. And I have killer recipes for pumpkin and pecan pies!

Oh yeah, and be on the watch for the next giveaway. The prize is a secret, but it will be something that will make your autumn desserts shine!

So, I went to Olive Garden with some friends the other day. We noticed that they've brought out their pumpkin cheesecake. We were too stuffed after lunch to even think about dessert, but just thinking about it made me want some. So I brought out my own cheesecake recipe! 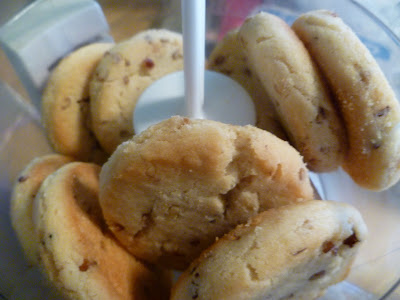 It starts with a crust.
I usually would use gingersnaps, but our grocery store sometimes carries food that's past its use-by date--and today the gingersnaps said September 9. I'm no genius but I'm pretty certain it's past the 9th.
So instead I used pecan sandies. I like eating pecan sandies by themselves better than gingersnaps anyway. I bet I could have found a horse or two to finish off a bag of gingersnaps, though. But my husband's been making a valid attempt to finish off the remaining sandies. Don't want cookies to go to waste, you know.

I also debated using golden Oreos. But I thought pecans would be nice with the pumpkin. And Oreos might not have made it until the time I actually made these cheesecakes. 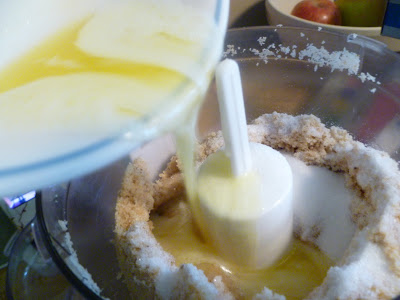 Crush the cookies up in your food processor (or, if you're having a bad day, you can put them in a plastic bag and beat the heck out of them. Smoosh 'em with a can or a rolling pin.)
Once they're crushed, you can make them even more fabulous with a healthy dose of sugar and butter.
Because what isn't better with sugar and butter. 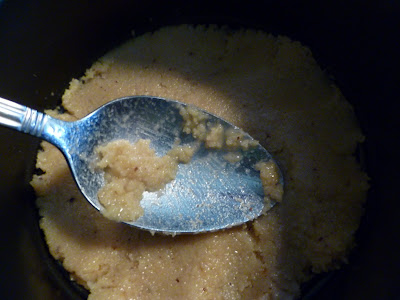 Press the crust firmly into springform pans.
If you remember my Sexy, Silky Bittersweet Chocolate Cake recipe, you'll also remember that I currently don't have a large springform pan.
So I'll be making mini cheesecakes.

After pulling these out of the oven, I realized that I could have made them into bars. But mini cheesecakes are so much cuter. 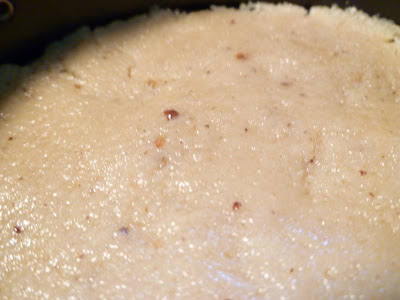 Bake the crusts for a few minutes in the oven to firm them up.

Look at those yummy bits of pecan, all ready to be toasted in the oven. 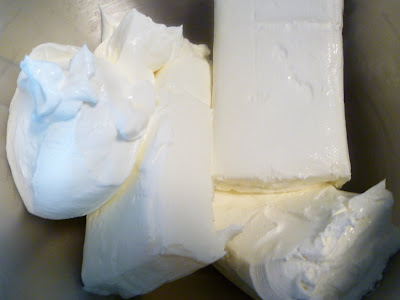 When they're baking, you can start on your filling.

Here's the base--cream cheese and sour cream. I like using sour cream in cheesecake. It helps keep the filling moist and from cracking and overbaking. And it just tastes good.

If you like that dense, thick cheesecake like you get from the Cheesecake Factory, then you might want to stick with all cream cheese. The sour cream gives it a little more of a "custard" feel, which I actually prefer, but you may not. 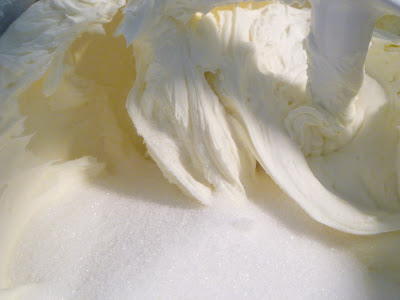 Make sure everything is room temperature. Beat it around in your mixer for a while. If your cream cheese is cold, you'll have a heck of a time getting everything smooth.

Once your filling is fluffy and beaten together (and you've remembered to scrape the bottoms and sides of your bowl), sweeten things up a bit with some sugar. 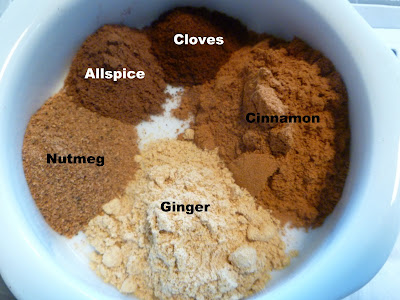 Next are the spices. It's a nice, tasty, autumn-y mix.

I like using the individual spices, rather than buying a premixed pumpkin pie spice. This way, you know how much of each spice you've got, and if there's one you don't like, well, then, you don't have to add much of it. I probably add more cloves than necessary, but I really like my pumpkin desserts spicy. 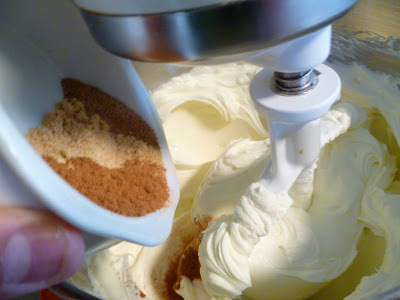 Pour the spices in with your filling mixture. I like to add it now to make sure all the spices are incorporated.

I love the peaks the mixer makes in the cream cheese. They remind me of fancy crown molding or something. 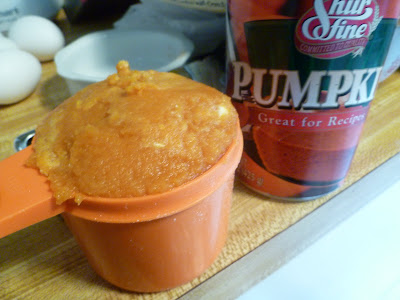 I never get why there can't just be recipes that use a whole can. I hate throwing part of a can of pumpkin out.

Or they could start selling pumpkins in one-cup measurements. One of those two would make me happy. 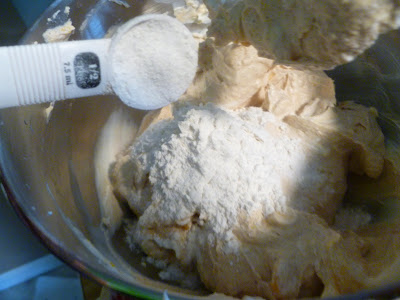 Once the pumpkin is thoroughly mixed in, it's time for the flour. Once the flour is in, you don't want to mix your filling too much. When you add the remaining ingredients, mix until just combined, and not any more. Just another way to avoid cracking the top of your cheesecake.

Did you remember to scrape the bowl again? 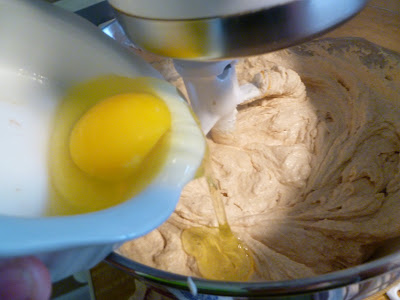 After the flour come the eggs--4 room temperature eggs, to be exact.

Crack them in one at a time and mix thoroughly after each addition. 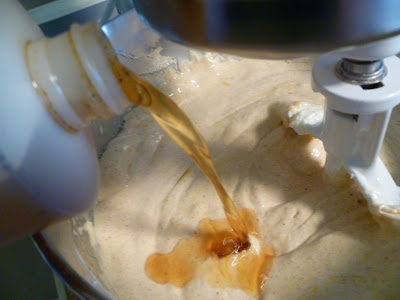 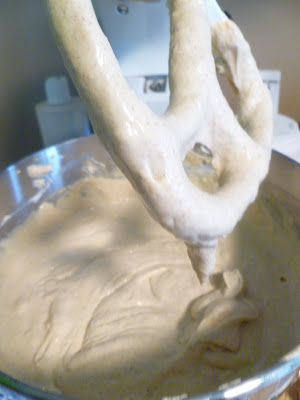 That looks like a pretty tasty bowlful of batter. It smelled pretty awesome, too. 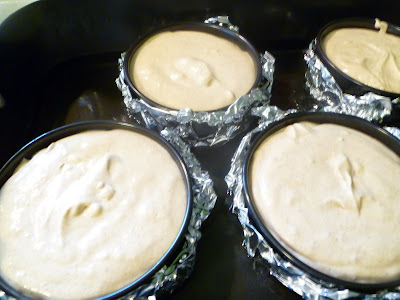 Here are my mini pans. Since they're not waterproof, I surrounded the outsides of the pans with tinfoil. The mini cheesecakes are going to be baked in a water bath.

You're going to be leaving your cheesecake in the oven for a long time.

It's only going to take 45 minutes for your cheesecake to bake. But you're going to be leaving it in the oven for another two hours. And make sure it cools properly after that.

The cracks are caused by your cheesecake shrinking. The sides of the pan pull against the cheesecake, stretching the top. Cracks can also be caused by overbaking. You want to bake your cheesecakes at a low temperature, and in water bath. The water bath helps the cheesecake cook evenly so the outside doesn't cook faster than the inside, and it also keeps moisture in the air that prevents the tops ffrom drying out. 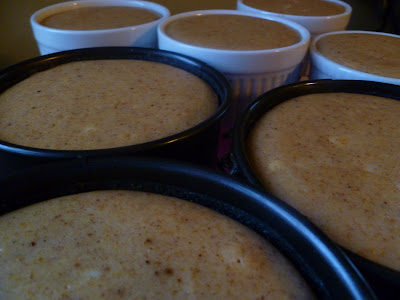 Here they are coming out of the oven after their two hour rest.

My natural light was fading, so they look darker than they really were.


Because my small springform pans have less volume than a large pan would, I ended up with some extra batter. So I poured the rest into custard dishes and baked them (also in a water bath) along with the cheesecakes. And because it would be nearly impossible to turn these out with them still looking okay, I decided to eat them like they were custards. 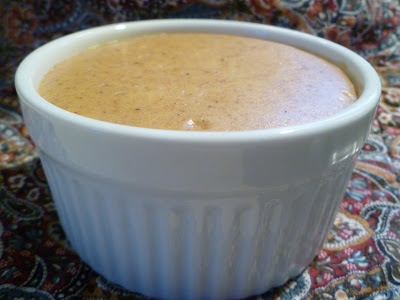 Here are my cute little ramekins, full to the brim with cheesecake. 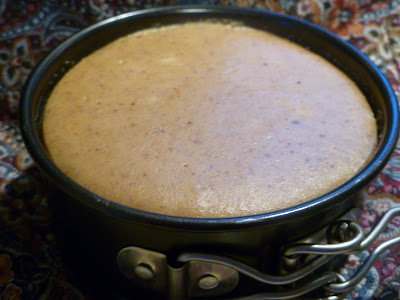 And here's what the little cheesecakes look like, still in their pans.

I really like the silver clips that hold the springform sides on. I don't know why.


Because I couldn't help myself, and because it was getting late, I ate one of the cheesecakes in the ramekins right away.

And they were still warm! And I can tell you now, the filling is delicious, whether it be over a cookie crust or just by itself. If I can find my kitchen blowtorch, I may sprinkle some sugar over the top and pretend it's creme brulee. Think that would be too much? Okay. I'll just dip some pecan sandies into it. That'll solve my craving for crunch. And it won't be over the top if nobody sees me do it ... right? 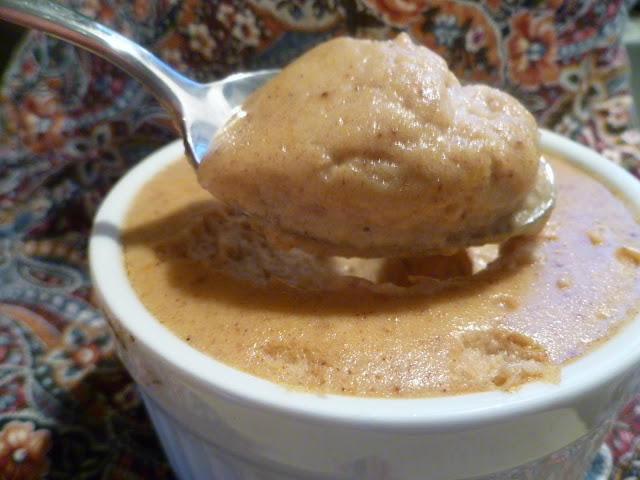