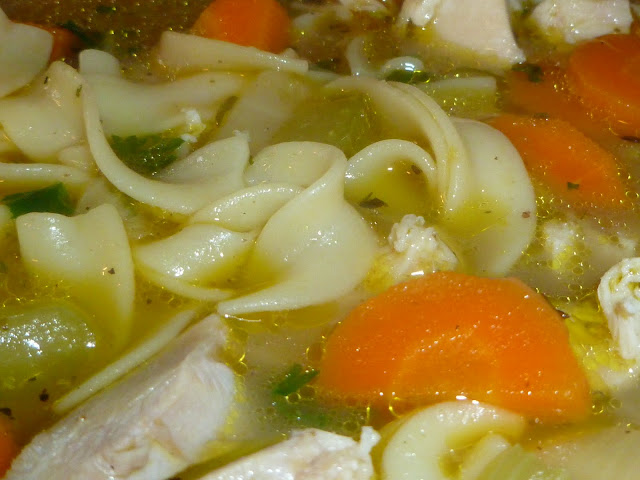 As I promised, here's a recipe that will help you use up any extra chicken you may have left over from the Simple Roasted Chicken recipe from Tuesday. And it's a cold, rainy day here, so a bowl of homemade chicken noodle soup might be exactly what you need to finish out the evening. 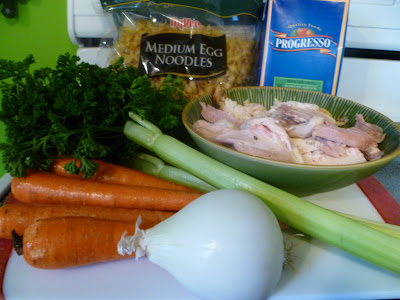 I'll admit from the getgo that I cheat a little bit and used boxed chicken broth as well as a boullion cube. My usual method is to make chicken broth from the leftover carcass (never throw your chicken carcasses away!) and then make the soup with that. But I also usually do that on a weekend day, since it takes a while, and being as it's Wednesday I haven't had that time. Maybe I'll make some this weekend to share with you all. Definitely use homemade if you've got it. 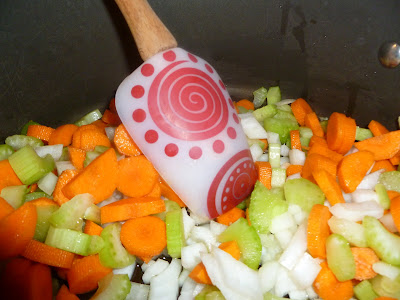 Like any good chicken soup recipe, this one starts with mirepoix--in English, a mix of carrots, celery, and onions.

I love carrots. A lot. So I add lots of carrots.

Saute your mirepoix in some olive oil. You'll want it to be tender, with maybe just a little crunch left. 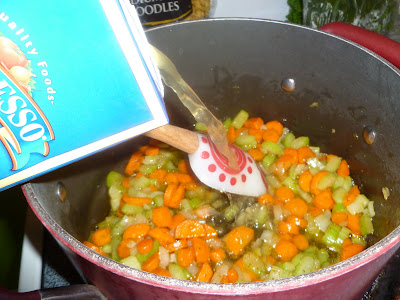 Once your vegetables are cooked, you can pour in your chicken broth or stock. 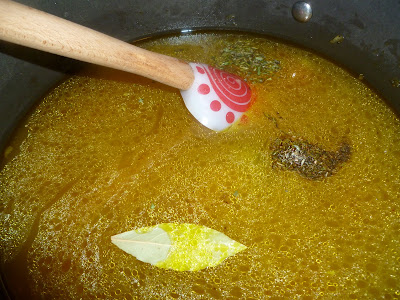 Now is also the time to add your seasonings. I just add salt, pepper, thyme, and a bay leaf. I add fresh parsley later; you could certainly add dried right now if you wanted. 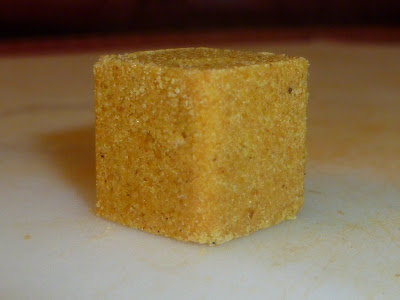 I also add a couple extra things.
First is a boullion cube. I think it adds a little extra "chickeny" flavor. Maybe I just have a salt addiction. 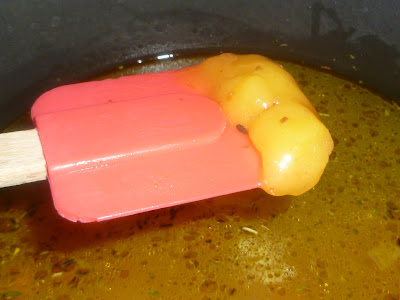 ﻿﻿﻿﻿I also add some chicken fat. This is a big glob of fat leftover from when I roasted the chicken. I just put all the fat in a plastic bag, made sure it was flat, and then froze it. Then it's ready whenever I need it.

Some people freeze their fat in ice cube trays. Which would work fine if I could ever remember they were there. Usually I remember and then go, "Oh no!" and open the freezer to find freezer-burned chicken fat ice cubes. 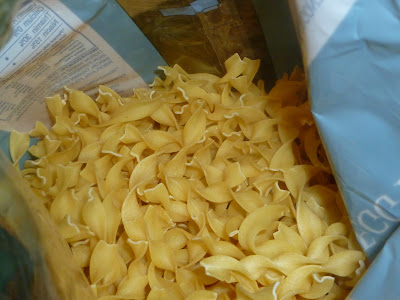 Bring the liquid to a boil, and then pour in your noodle of choice. I like extra-wide egg noodles, but when I sent The Man to the store, I wrote "medium" instead. So they're a little thinner than the noodles I usually use, although no less satisfying. You could also add cooked white rice or alphabet shapes, if you wanted to get down-homey.

I usually eyeball the amount of noodles. I like a chunkier soup so I add a lot of noodles. If that's not your style, just add fewer noodles. It's not going to hurt the soup any.


Stir the soup to make sure your noodles aren't going to stick to the bottom of the pot or to each other, and then let the soup bubble away. 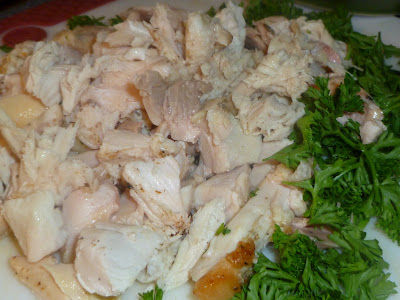 When the noodles are about done, you can put the chicken in. I also chop up some fresh parsley to brighten the soup a little.

If you don't have leftover chicken, you can dice up a raw chicken breast or two. 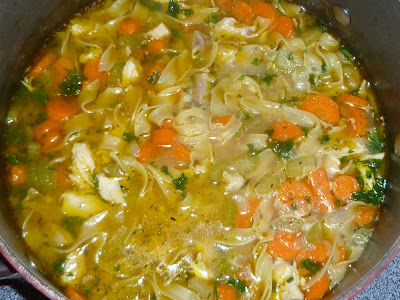 Once the noodles are fully cooked and the chicken is heated (or, if you used raw chicken, cooked), your soup is ready.
See? I told you I like my soup chunky.

Get a big ladle and pour yourself a bowl. Crumble some oyster crackers over the top if you feel so inclined. Close your eyes, dip in your spoon, and take a big bite. And don't stop until it's gone. You won't want to. 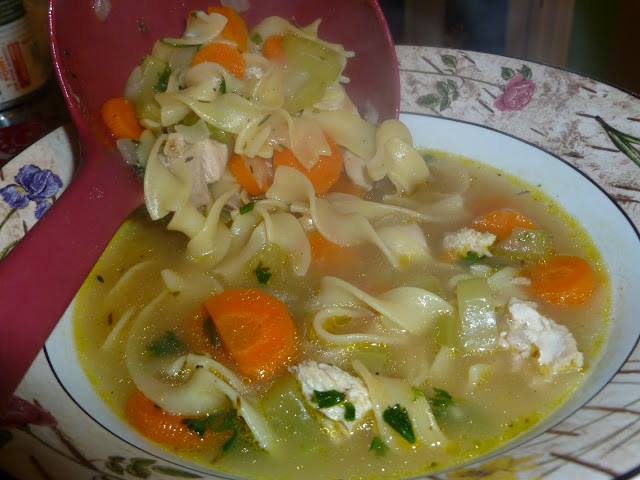