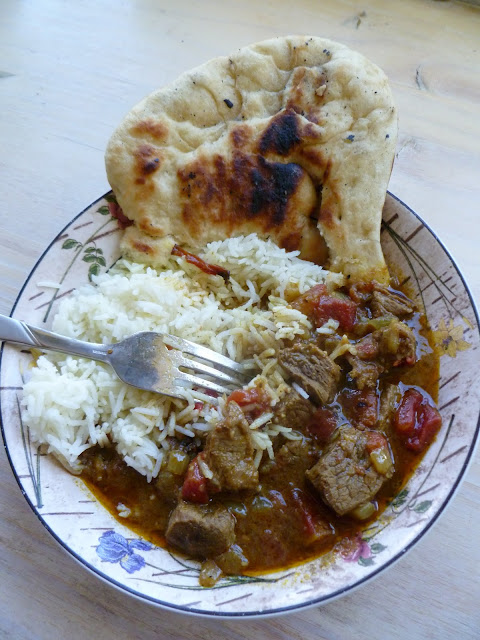 The first time I had curry was in high school. One of my friends wanted to meet for lunch, and, being a vegetarian as well as a self-professed food snob, he didn't want to meet just anywhere. He suggested one of the Indian restaurants in town. I, not wanting to seem the lame friend, agreed, and showed up, somewhat hesitant but willing to give it a try. I figured if I didn't like it, I could just eat the rice.

There was no need to worry.


I piled my plate with food with exotic names--chicken makhani, rogan josh, pakora. Underneath lay my safety of basmati rice (flavored with saffron) and on top was a small mountain of naan. In the end, both were used to soak up the gravy left behind.
Since then, I try to get a curry fix whenever I can. Unfortunately the nearest Indian restaurant is two hours away. So I started making my own. It's become a staple in our house, and I make it at least once a month. The recipe is enough for our family to eat for at least a couple of meals. It can be made on the stove, in the oven, or in a crock pot. It can be made with pork, chicken, lamb, or (even though it seems kind of wrong to me!), beef. You could even do it with chickpeas or potatoes if you wanted to go the vegetarian route--or if you had too many guests and not enough meat, you could add potatoes along with the meat.
It's become a comfort food, in the same category as roasted chicken or beef stew. And, although it might seem like a complex recipe, once you've made it a couple times and have all the ingredients at hand it gets really easy. 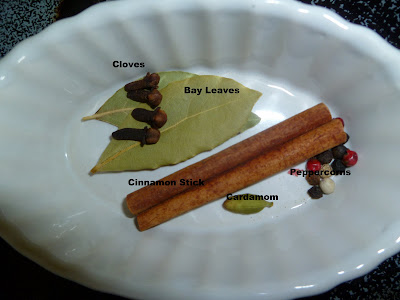 The first thing you'll want to do is get your spices ready. You'll need a stick of cinnamon, cloves, peppercorns, bay leaves, and a cardamom pod. 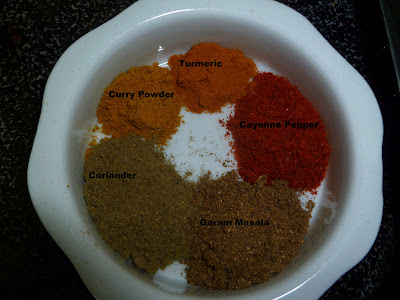 In a seperate bowl, get your secondary spices ready (these will go in later, but it's a lot easier to measure stuff out before you've got it all going on the stove. That way there's no panic about things burning!) For your secondary spices, you'll want turmeric, coriander, cayenne, and garam masala. I also like to add in some premade curry powder--I don't know what it is but there's something familiar and comforting about it.
Garam masala is actually a blend of spices. It usually has ground white and/or black pepper, cloves, cumin, coriander, and other flavorful spices. The flavor of your curry will be dependant on what spices are in your particular blend.
I know some of the other spices seem unfamiliar, but whole coriander (which is the seed of the cilantro plant), bay leaves, and cloves came with my spice rack. I grind the coriander myself, either in a mortar and pestle or in a coffee grinder. Turmeric should be easy to find anywhere. Cardamom pods  may be harder to find--I buy mine at specialty food stores or a food co-op. If you really can't find them anywhere, I have substituted ground cardamom, which can be found at most grocery stores. If I use ground, then I add it with the rest of the ground spices, not the whole ones. 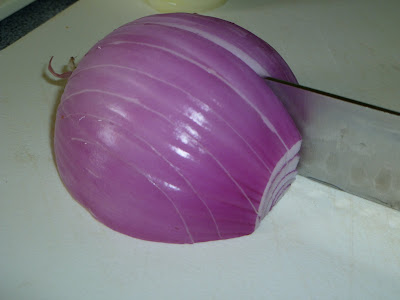 Next you'll want to chop your onion. Chopping onions is really easy and something everyone should know how to do. First, you need to peel the onion and chop off the stem end (leave the root intact or your onion will fall apart.) Cut the onion in half. Then cut the onion toward the root. 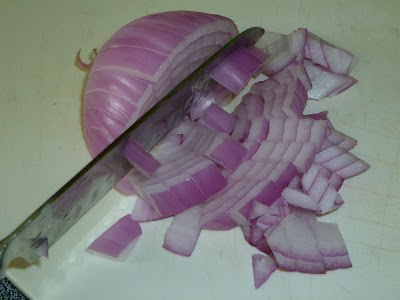 Turn the onion 90 degrees and cut again. This will make nice, tidy dices of onion. 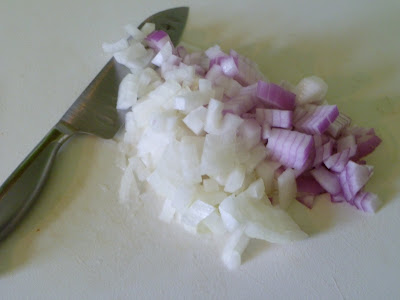 See? How easy was that? 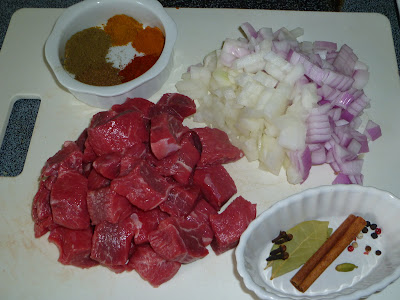 Here's what everything will look like when it's all prepped and ready. 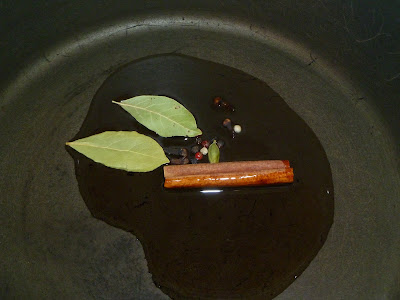 The next step will require a large pot. Measure your oil and add your first spices (cinnamon, etc.). Heat everything over medium heat. 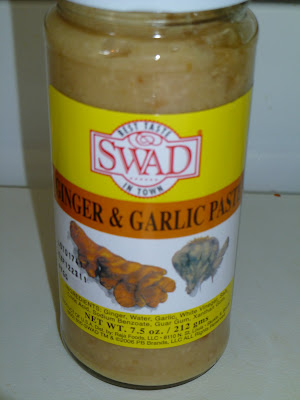 While your spices are toasting, you'll want to mince a large garlic clove and a knob of ginger. Be sure to mince them up really, really finely. Biting into a piece of ginger is not the best experience you'll have in your life.
Today when I was at the store I found this jar of ginger and garlic paste. I'm going to give it a try today, instead of doing more chopping--anything to save a couple minutes! 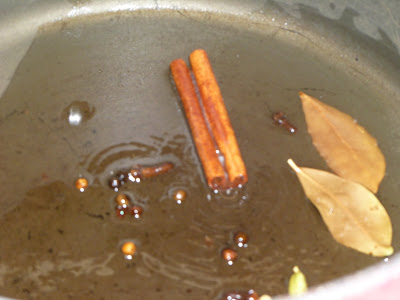 At this point, your spices should be getting nice and toasty. Don't stand too close (for example, with your face over the pot, inhaling), because sometimes the spices can pop. 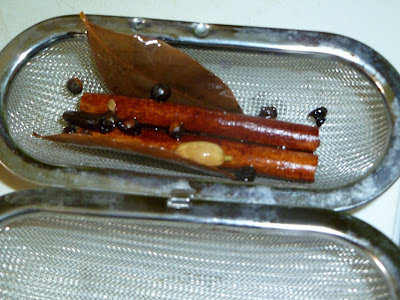 When the bay leaves start to sizzle and the cinnamon stick starts to uncurl, fish the spices out and wrap them up in a piece of cheesecloth or a metal strainer. You don't have to do this, but then there's the risk of biting into a clove or a whole peppercorn later. They're pretty distinctive-looking so it's not a huge problem, but for me it's just a "because I can" thing. And because we have a toddler who might not know to eat around the whole cloves.
Anyway, once you've collected all the spices if you're going to, seal whatever you're using to keep them in and toss the spice package back into the pot. 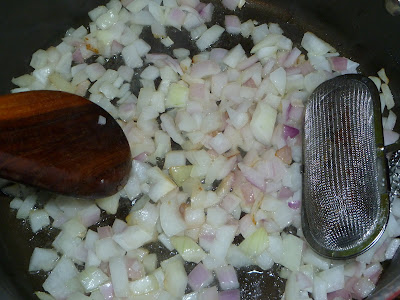 Add your onion to the pot. Saute them until they turn a delicious golden brown. Keep watch over them so nothing burns. It's easy to walk away and forget about them, and that's something you definitely don't want to do.
I know. I've done it before. Nothing is as disheartening as watching part of your dinner go into the trash, even if it is just onions. 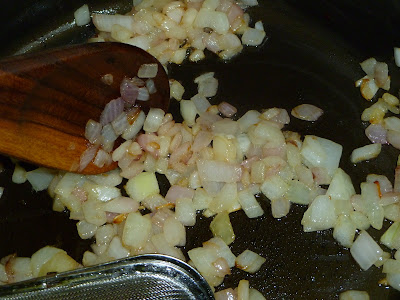 Once the onions are caramelized, it's time for the next step. 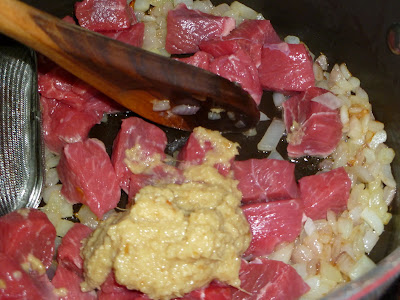 Add in the garlic and ginger. Also add in some cubed lamb. You can use any cut of lamb you like--this is leg. You'll want to use something tougher though (don't waste chops on this!), since it's going to be braising for a while. Season everything with salt and pepper and cook for another 20 minutes. 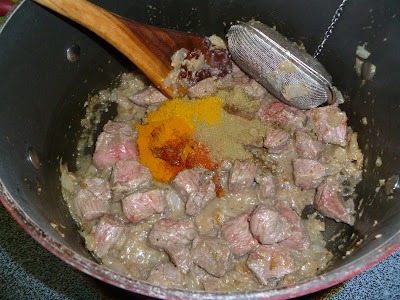 After the lamb has cooked a bit, add in your ground of spices (turmeric, coriander, etc.) 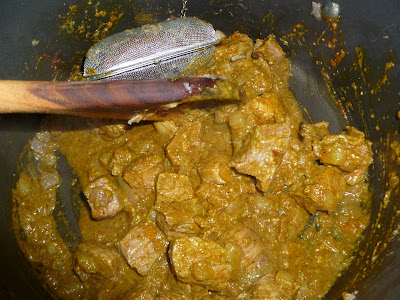 Add 2 tablespoons of water to keep your spices from sticking and burning, and cook until everything is combined, about 5 minutes. 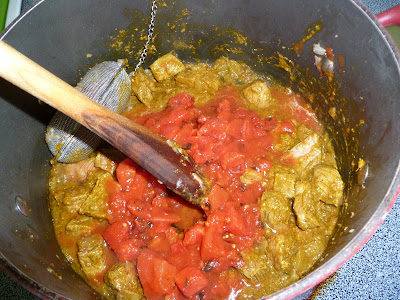 Add a can of tomatoes. I'm fond of these fire-roasted tomatoes but really any kind of diced tomato you have on hand will do. Cook for another few minutes, and then lower the heat to medium-low. Add 2 cups of water. 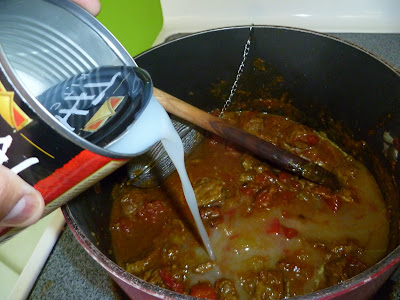 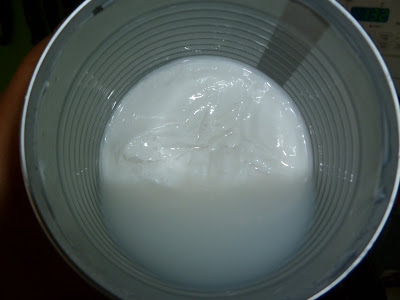 ... a solid substance on the bottom of the can. 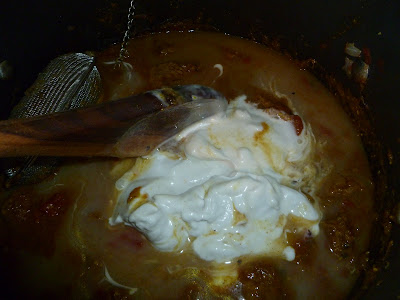 You can avoid this by shaking the can vigorously before opening, but in this case it's all going in the pot so it doesn't really matter if it's a solid or a liquid.
Cover the pot and cook the curry until the meat is tender, at least 2 hours. Your house will fill up with a spicy, sweet, meaty smell that will make you hungry long before the curry is ready.
I've done this recipe in a crock pot before; it worked fine but it got a little dry. If you go the crock pot route, you'll still want to do everything up until the meat step on the stove, and then pour everything into your crock pot. Add an extra cup or so of water, too. Nothing smells as bad as something burning in a crock pot. If you're around while it's cooking, try to stir it every once in a while. 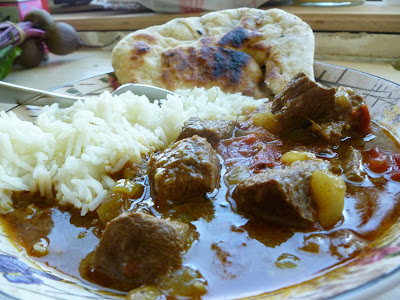 If you finish this off in an oven, do the same as if you were making it in a crock pot but set the oven temperature to 300F and don't add the extra water.
Either way, this curry is amazing when served with basmati rice. Sometimes I make it with homemade naan (recipe tomorrow!) Other times, if I'm strapped for time, I'll use storebought pita bread, either grilled or drizzled in olive oil and wrapped in foil and warmed in the oven. The bread adds a different texture to your meal, and is a great tool to sop up the extra gravy. Make this lamb curry tonight, you will not be sorry.
Recipe: Lamb Curry
1 1/2 pounds lamb, cubed
1/4 c. vegetable oil
2 bay leaves
1 cardamom pod
1 2" piece of cinnamon stick
4 whole cloves
10 peppercorns
1 1/2 c. chopped onion
1 tbsp. minced ginger (or ginger paste)
2 tsp. minced garlic
*Note: I have also used ginger and garlic paste. In this case, I used around 3 tbsp. instead of the minced ginger and garlic that the recipe calls for.
1/2 tsp. turmeric
1/2 tsp. curry powder
2 tsp. coriander
1 tsp. cayenne pepper
1 1/2 tsp. garam masala
1 16-oz can diced tomatoes
1 16-oz can coconut milk
Heat oil in a large pot; add bay leaf, cardamom pod, cinnamon stick, peppercorns, and whole cloves.
When bay leaves start to sizzle and cinnamon stick begins to uncurl, add onions and saute until golden brown, about 12-15 minutes.
Add minced ginger and garlic. Season with salt and pepper and cook for 20 minutes.
Add ground spice mix. Stir for 5 minutes and add 2 tbsp. of water to keep from burning.
Add tomatoes; cook 5 minutes. Lower heat to medium-low. Add 2 c. water.
Add coconut milk and stir to incorporate.
Cook until meat is tender, 2-3 hours. Serve over basmati rice and with flatbread. Sprinkle with chopped cilantro if desired.
Posted by KimChee at 4:47 PM