I've been wanting to start a blog about food for a while now--however, time and the lack of a decent camera (ie one that will take pictures of things less than 3 feet away) put me off. With the purchase of a new camera, however, the excuse no longer flies and so it's time!

Today I made a visit to the local farmer's market. I have a horrible habit of buying whatever looks good and then not using it to its full potential. Today my weakness was fresh cucumbers.

I'll be the first to admit that I'm not a fan of pickled anything. Olives, eggs, peppers, you name it, and I will give you a polite "no thank you." It's the sour, vinegary bite that puts me off. But add a ton of sugar to the mix and I do a complete 180. I'll admit it--I have a horrible weakness for the sweet, tangy crunch of bread and butter pickles. But I'm the only one in the house that likes them so to break out the canning equipment for something only I will eat seems a little senseless. 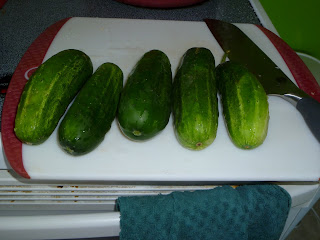 And then I remembered--refrigerator pickles! An item found in every grandma's fridge come summertime. Quick, easy, and best of all, you get nearly instant gratification from them. And they last for a long time. Long enough for a single person to finish them all off.
To start, just pick up some lovely cucumbers from your local farmer's market. You can use store-bought, too, but I love the texture of the cucumber skin and they wax the ones in the store. There are 5 pictured here, but I used 8.
I washed them off first. They looked clean, but you never really know where they were beforehand, you know? It's a peace of mind kind of thing. 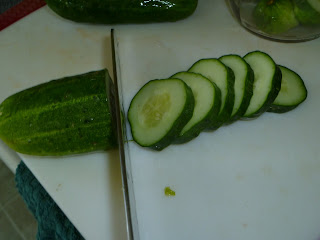 Cut them up into thick slices. I like a nice, thick chunk of pickle. Those floppy, flimsy things you buy at the store to put on burgers are not what we're making here. 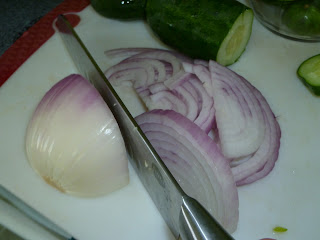 Then thinly slice up some onion. I used red onion that I also picked up at the market, but any type of onion will work. 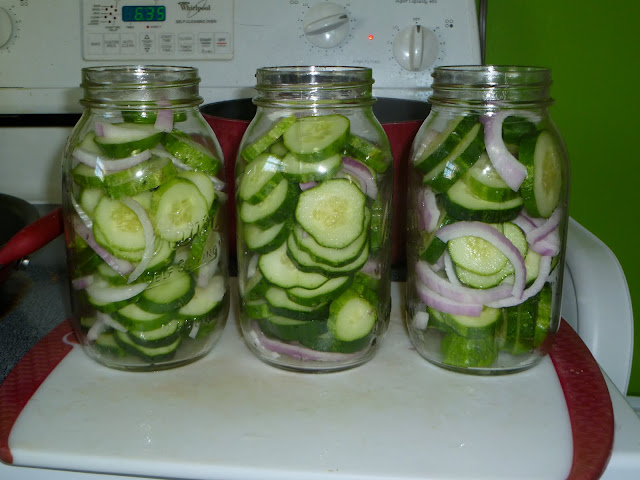 Pack the onion and cucumber slices loosely in mason jars. I think I might have packed them too loosely--after I added the solution, they shrank up and left quite a bit of room. But the amount of ingredients I had really made it so I would have a little too much for 2 jars and not quite enough for 3, once the vinegar solution was added. I went with 3 because I didn't want any waste. 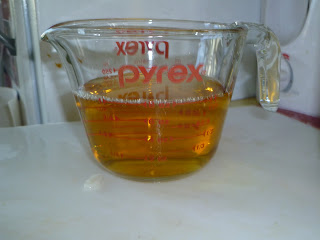 Next is the vinegar solution. The recipe called for a cup of cider vinegar. I used 1/3 c. rice wine vinegar and 2/3 c. cider vinegar, just because the rice vinegar is a little more mild, and I also like the taste.

Measure it out and pour it into a sauce pan. (Do I have to mention to use a liquid measuring cup for liquid and a dry measuring cup for dry ingredients like flour and sugar? You'll get a fairly close measurement if you use them interchangably, but for things like baking you definitely need to use them correctly. 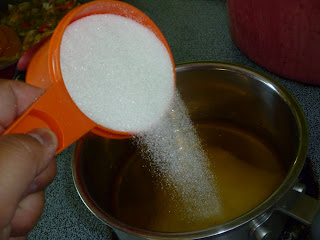 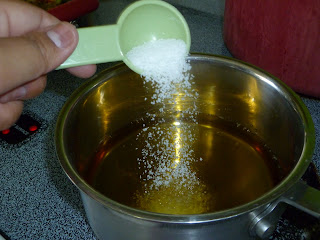 Add 1 tablespoon plus 2 teaspoons of salt. I used kosher salt because that's what I had on hand. 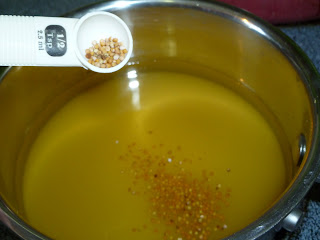 Add 1/2 teaspoon of mustard seed. Mustard seed is (if you haven't guessed!) what they make the mustard you put on your ketchup out of. 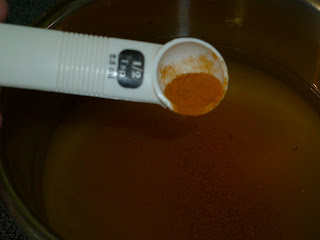 Add 1/4 teaspoon of ground turmeric. Turmeric is used for color as well as its germ-fighting abilities. 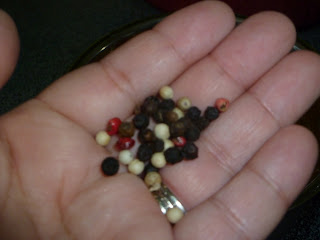 Toss in some peppercorns. I didn't measure, just got a small pinch and threw 'em in, but I'd guess it's about 1/2 teaspoon. I'm using a blend of red, white, and black peppercorns, but just black would be okay, too. 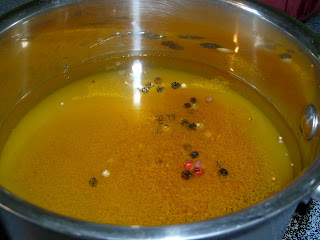 Stir the mixture around and turn your stove on medium heat. When the mixture starts to boil, leave it alone for 5 minutes to make sure the sugar and salt are dissolved. 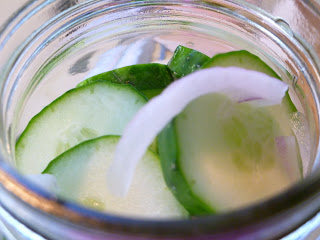 Mmm. They're just waiting for their vinegar bath. 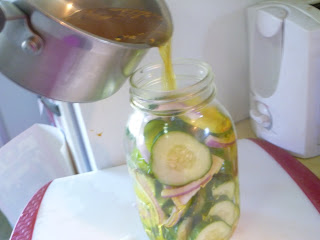 While the mixture is still hot, pour it over the top of the cucumbers and onions. Cap the jars and make sure they're definitely well capped before gently shaking the jars to evenly distribute the mixture. Nothing's worse than burning yourself with boiling vinegar and sugar. 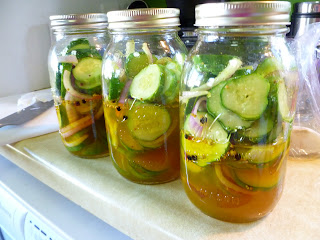 And there you have it...three jars of homemade sweet refrigerator pickles! They should be ready to eat within 24 hours, and are good for several months in the fridge.
*Note: The recipe given above for the vinegar solution was actually doubled when I realized it didn't look like enough to distribute among the three jars. Recipe written out below is the doubled recipe.
Recipe:
* 8-10 fresh cucumbers (enough to fill 3 quart-sized Mason jars)
*1/2 onion
*1 1/3 cups apple cider vinegar
*2/3 cup rice wine vinegar
*3 tablespoons and 1 teaspoon salt
*1 teaspoon mustard seed
*1/2 teaspoon turmeric
*1 teaspoon whole peppercorns
Cut cucumbers into thick slices.
Thinly slice onion.
Loosely pack cucumbers and onion into Mason jars.
In a saucepan, combine vinegars, sugar, salt, mustard seed, turmeric, and peppercorns. Stir together and heat over medium heat until the mixture boils. Allow to boil 5 minutes.
Carefully pour hot mixture over the cucumbers and onions. Seal jars, gently shake to cover evenly, and stash in the fridge. Enjoy delicious pickles the next day!
Posted by KimChee at 8:29 PM

Email ThisBlogThis!Share to TwitterShare to FacebookShare to Pinterest
Labels: pickles, side dish, vegetable